Lion Ark is an unusual film. It documents the efforts of Animal Defenders International as they work to save African lions from abuse in traveling circuses in Bolivia. You’ll see undercover footage of the abuse and watch their efforts to get them safe. Tim Phillips and Jan Creamer are at the forefront of this cause. The work didn’t end in Bolivia. Now they’re in Peru rescuing more animals. They took a short break in their work to talk to me about the movie and their efforts. You’ll be amazed at what they have to say. Bang it here to listen in on my talk with Tim And Jan

You can help by going to ADI 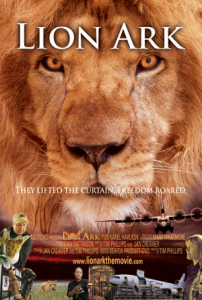 Gino Sassani is a member of the Southeastern Film Critic's Association (SEFCA). He is a film and television critic based in Tampa, Florida. He's also the Senior Editor here at Upcomingdiscs. Gino started reviewing films in the early 1990's as a segment of his local television show Focus. He's an award-winning recording artist for Omega Records. Gino is currently working on his 8th album Merchants & Mercenaries. Gino took over Upcomingdiscs Dec 1, 2008. He works out of a home theater he calls The Reel World. Favorite films: The Godfather, The Godfather Part II, The Body Snatcher (Val Lewton film with Karloff and Lugosi, not the pod people film), Unforgiven, Gladiator, The Lion King, Jaws, Son Of Frankenstein, The Good, The Bad And The Ugly, and Monsters, Inc.
Exclusive Interview With Jamie Bamber Of John Doe: Vigilante Contest: Win John Doe: Vigilante From ARC Entertainment