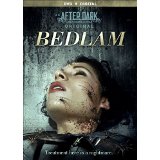 “You will be severely punished for your disobedience.”

Yeah, there is plenty of that going on in this film. What a fragile construct the mind can be, or at least that is how it appears in Bedlam. As the movie progresses, it becomes harder to tell who is more mad, the patients or the people in charge. However, the film does teeter between the line of real insanity and comical insanity.

George is haunted: haunted by memories of past psychological, sexual, and physical tortures he was forced to endure as a child. The prolonged effects of these events have manifested in several different psychological conditions that have made function in everyday society near impossible. At his doctor’s suggestion, George admits himself into Bedlam; however, it does not take long to realize that all is not right at this institution. The guard are unspeakably cruel and violent, going as far as to whip the patients for their perceived transgressions.

The longer George spends at the asylum he is not only forced to confront the demons of his past but is also subjected to various experiments for military applications. This is an interesting aspect of the film, because it is the time when the audience is forced to call into question the legality of what the staff is doing to the patients. The selling point during this portion of the story was watching Cutter demonstrate actually caring for George; encouraging George to remain strong after receiving an injection that had adverse effects on him. That is when he isn’t flailing around his cell in his own delirium.

The film has a couple of interesting characters in it; I’ll give it that, with the most interesting having to be Cutter (Gary Boulter). He is such an off-the-wall character, making it pretty much impossible to predict what he will say or do next, a good trait to have in a character confined to an insane asylum, if you ask me. I was very satisfied with Boulter’s performance; despite him not being well known to me before watching this movie, he is someone that I will be looking for and hope to see more of in the future. Boulter displayed a lot of energy during his performance, jumping around his cell at all hours.

The movie takes on a Hotel California vibe after the revelation that apparently no one leaves the asylum alive. Granted, this conclusion was not difficult to gather; the delivery of the news coming from a treasured character was the best option. That is also when the tempo of the film changed, no more pretense about how the asylum is run. No more innuendo; everything is out in the open then. It is also during this time that we watch George teeter back and forth between sanity and insanity; the worse the situation gets for the character, the deeper he slips into his own psychosis. That gives the movie a reality base.

The story also doesn’t shy away from the gore or getting downright graphic with some of the things it chooses to display. Definitely not for the faint of heart or those with weak stomachs. There is one continuous theme that occurred throughout the film that I didn’t care for: the commercial-like and game-show format that happened throughout the film. This theme makes it difficult to take the movie seriously. Clearly it is meant to lighten the mood of the overall seriousness of the movie, except it just makes the whole thing even harder to follow.

In conclusion, though difficult to watch at times, if thriller stories are your thing, this is definitely your kind of movie. A worthwhile experience for those brave enough to watch it. Not for the faint of heart or those with weak stomachs.

Jeremy Butler is a film school graduate of the International Academy of Design and Technology. He is been writing for Upcomingdiscs since 2012; however, movies have played a big part of his life for much longer. Favorite genres include horror, science fiction/fantasy, and comedy. Favorite movies are V for Vendetta, Boondocks Saints, Kiss Kiss Bang Bang, and The Godfather.
The Book of Negroes Halt and Catch Fire (Blu-ray)