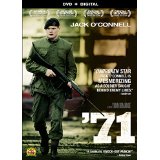 Typically I do not seek out modern war films for leisure watching. They may take great strides to make battles seem realistic, or just more extreme. Normally with the focus on cinematography and editing, the depth of the story is sacrificed in the process. Sure, you have a narrative to follow, but ultimately what satisfies is the visual masterpiece. For me, ’71 followed this pattern accurately, though I was pleasantly surprised with the visuals, as they went above and beyond my expectations.

’71 is director Yann Demange’s first feature film, as well as writer Gregory Burke’s first theatrical screenplay. The film follows British soldier Gary Hook (Jack O’Connell) as he leaves behind his younger brother to police Belfast during the Northern Ireland conflict. He is separated from his unit while they are quelling a riot and is left behind on the violent city streets. While trying to survive the night, he discovers a secret political agenda led by prominent figures from both Belfast and the British Army. His quest to survive ends the next day, when his unit returns to find him.

I would have to say that the most off-putting element of this film is its title. ’71 is extremely vague. Perhaps the Northern Ireland conflict, or ‘The Troubles’ as natives would know them, was the most significant event in the UK that year. However, to an American viewer such as myself, the Northern Ireland conflict was brand new to me, and I had to do a little research after screening the film. The fact that I was not aware of these events may have caused some of the story to go over my head; I was never confused, but there were some significant moments that may have been lost on me due to my unfamiliarity with the riots.

That being said, the film’s story felt rather empty. Seemingly significant characters are introduced, but never expounded upon. Gary’s younger brother is housed in an orphanage, and we only see him in the beginning and at the end. His only purpose that I can see is to give Gary something to long for. The issue with this is that the sequences with his brother eat up a lot of screen time only to convey a single emotion. I have the same issue with Captain Sandy Browning (Sean Harris), who is written to be an interesting character and occupies a significant amount of screen time, but the film leaves you wanting to know more about him.

Regardless, the story was not bad, and it was indeed engaging. However, the real champion of the film was the cinematography of Tat Radcliffe. There are a few bothersome moments of shaky-cam that attempt to convey action, but every other part of the film is just fantastic to look at. This comes as no surprise when you learn it was shot on the Arri Alexa, Arri’s first mainstream foray into digital cinematography cameras. My favorite film was shot on an Arriflex 535, one of the Alexa’s predecessors. Needless to say, I am a fan of the company, but I digress.

The majority of the film takes place on the streets at night, and the camera is able to pick up a lot of beautiful silhouettes. Through a combination of silhouettes and camera movement, the thrilling chase scenes become more intense without sacrificing artistic integrity. Where typical war-type thrillers may momentarily shroud the hero in silhouette in an effort to say, “look at this bad-ass,” ’71 uses the silhouette and other shadows to immerse the character further into danger (for longer than just a moment, I might add).

Though the story feels like an empty shell, the direction and cinematography make the film worth watching, even a second time. Yes, the modern war films typically suffer from shallow stories, but ’71 makes up for it with creative and strong cinematography. Overall, it was a delight to watch. Just remember: visuals first, story second