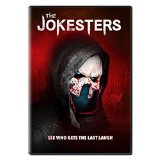 Jokesters takes a long time to get to the point. The plot is extremely long-winded to the point that I questioned if the long awaited gruesome stuff would ever come. More time was spent on the setup, specifically the wedding reception sequence, than on the actual climatic events of the movie. Some of the setup was entertaining but it didn’t take long before I was considering hitting the fast-forward button just to get to the good stuff. I wasn’t sure what to expect when I put the disc in, but it didn’t take long for me to put together all that was going to happen (well, maybe not all; don’t want to come off like a know-it-all).

Speaking of the good stuff, that was a lot of preparation for a very predictable and disappointing climax. Not to beat up on it too much, but there were several things that needed to be done in order to elevate the overall experience. Half of the runtime dedicated to the setup should have been dedicated to the climax to better level the film. More time was spent on the events leading up to the killing than the actual killing itself. That is another aspect that needs to be addressed; by the time the blood and gore starts, the film is pretty much over. I would have loved to see more of a chase going on; it would have made things more suspenseful. Besides, the draw for a horror movie is the chase; there needs to be panic as well as the drive to escape.

It would have also been more beneficial had the would-be victims put up more of a fight; they all were taken down way too easily to be believable. The first one was believable simply because it was a surprise attack; no one saw it coming (unless of course you were paying attention, as I saw it coming a mile off).  Truthfully, what hurt the film the most was the buildup, because the rest of the story didn’t live up to the hype. It started off right: a group of friends with their own prank show tend to go a little too far when it comes to pulling pranks on one another. That was good; they even established a way to get all the characters in the same place with the group deciding to pull a prank on their buddy on his honeymoon. Kind of a crappy thing to do, and the type of thing that will definitely end a friendship, but still it got all the characters in the same place in a way that was believable. It is shortly after the arrival at the cabin that things begin to go sideways. Not to give too much away, but if they wanted to improve the story, the aforementioned wedding reception sequence needed to be cut down by half, and that time should have been applied to the chase aspect of the story.

There was one thing that was done in this film that did not bother me, which was surprising, as it usually does: camera style. Jokesters features the found-footage technique, which I am usually not a fan of. It normally too choppy and chaotic, but in this case it wasn’t so bad. There are a few moments where things are at an odd angle, but they are few and far between. This was probably the best format for the film, as that way it could be treated the way it was intended, like another episode of the character’s popular television show.

In conclusion, the moral of the story is to use your time wisely. It is just as important to spend as much time on the climax of the story as it is the setup, because when you provide more to one than the other, the whole story suffers. Jokesters had me in the beginning, because practical jokes are a favorite pastime of mine, but there is a fine line between having fun and being excessive, and the jokes ran a little too heavy on this one.

Jeremy Butler is a film school graduate of the International Academy of Design and Technology. He is been writing for Upcomingdiscs since 2012; however, movies have played a big part of his life for much longer. Favorite genres include horror, science fiction/fantasy, and comedy. Favorite movies are V for Vendetta, Boondocks Saints, Kiss Kiss Bang Bang, and The Godfather.
Tuesday Round Up: July 21, 2015 WKRP In Cincinnati: Season 3