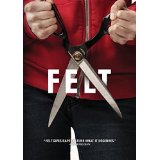 Sometimes films can move at a rather slow pace, but have a tremendous payoff. In many cases, this pacing pattern is identified by cinephiles as a “slow burn.” How slow the “burn” actually is depends solely on the director’s choice; some can be a little too slow for the amount of “burn” it provides at the film’s climax. Felt had no such problem with either of these concepts. The film is slow, yes, but its pacing fits so well with the devolving psyche (the “burn”) of the main character.

Felt is Jason Banker’s second feature film in the director’s chair. The story follows Amy (Amy Everson) as she spirals downward into a pit of post-traumatic depression. Suffering from an undisclosed trauma, we watch as Amy struggles with her homo-social relationships with Elizabeth and Roxanne (Elizabeth Ferrara and Roxanne Knouse) and attempts to develop a new intimate relationship with Kenny (Kentucker Audley). The film traces Amy’s damaged psyche: a maze of past relationships, burgeoning sexual tensions, and perverse reparative behaviors.

It is a little difficult to explain the film’s brilliance without spoiling some basic plot points.  The film is, in my opinion, a truer feminist take on the “rape/revenge” subgenre of exploitation films. The films of this subgenre include I Spit on Your Grave (1978), Straw Dogs (1971), and Irréversible (2002). While films such as these are praised for their empowerment of femininity, I believe Felt deliberately creates a misguided empowerment in order to address the realistic challenges that women face as victims of rape.

As previously stated, Amy’s trauma is completely undisclosed throughout the entire film. We as an audience have no idea what happened to Amy, which creates a rather porous empathy between the spectator and the screen. We are only able to gather the clues that Amy gives us along the way; she crafts a full body suit depicting the male anatomy and frolics in the forest alone. Eventually she creates a mask for this suit in the image of her friend’s boyfriend, a man Amy clearly does not respect. Watching Amy practice these disturbing behaviors without understanding the cause disorients the audience, which parallels Amy’s disorientation within her post-traumatic stress.

Banker has taken the rape/revenge genre and replaced the rape with a mysterious but ominous trauma. In doing so, he has created a space and time in which we may occupy to only begin to understand the complexities of the disturbances that rape throws onto a woman’s psyche. This is why I must praise the film’s slow burn. As a spectator, you sit in confusion with Amy for about an hour and ten minutes, which only leads to a rather traumatic and confusing end for both parties (Amy and spectator). The more I relive this film through writing this review, the more I enjoy the film and what I take to be its message.

Really the only thing that detracts from the film is the audio level of the dialog. A lot of the intimate moments are rather hard to hear. It is understandable that Amy would be difficult to hear at times (given her withdrawn character), but the people she talks to are pretty hard to understand at times too. For some people, whispered dialog can be frustrating, but overall, that is something that can be forgiven given the weight of the film’s intelligence and beauty. I wouldn’t call this film a favorite, but I will say it is one that I am proud to have in my collection.

Contest: Win The Surface On DVD From Entertainment One Nickelodeon Out of the Vault: Halloween