Posted in: Random Fun by Archive Authors on September 1st, 2015 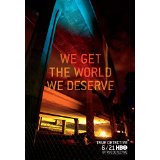 Popular opinion and so-called critical opinion often seem to careen off cliffs like lemmings in increasingly unpredictable ways guided by whims and subtle shifts in the proverbial winds. I find myself shocked by things praised and things condemned. Sometimes I feel like a little boy who sees a naked emperor while everyone else is shrieking how much they love the new elegant ensemble. In this case, I’m seeing a lovely presentation while there are many who are whining. Part of the problem is that Season 2 of True Detective is considerably distinct from Season 1. The nature of the series is that each season is a complete reboot with a new cast and location. American Horror Story also changes locations and characters but tends to recycle actors. True Detective made a determined attempt to change everything. The one thing it retained is the brooding, noir roots.

Vince Vaughn was fantastic, and that’s not something I’ve said in a long time. He was a trim and towering figure (also something that couldn’t be said for a long time). Vaughn’s complex, sharp, troubled, and intimidating Frank Semyon was the edgy focus of the series. He was not the detective. There were not two this time, but three.

Some complained that the story was dark and tortured. Funny, but I like my detective stories dark and tortured. I’ve seen lots of TV police stories, and they all are interchangeable. They feed us a predigested format that is relentlessly regurgitated. How different are the five versions of Law and Order from the multiple versions of CSI and NCIS? That was the thrill of the first season of True Detective, and I was just as enthralled this time around. It was grim last time, but Woody Harrelson did tend to lighten things up some last year. It was also a fresh concept then as well, but the concept remains strong.

This time each of the three detectives is driven by demons that they struggle to express. It also covers subjects not touched on in Season 1, best exemplified by Rachel McAdam’s Ann Bezzerides. It flipped the script on what to expect of a female character. She was a tough and unavailable hard case formed in fire from a traumatic childhood. Ann seems centered, focused, and all business, but slowly reveals the cracks. She is a match for Colin Farrell’s Ray Velcoro and Taylor Kitsch’s Paul Woodrugh. All three detectives were damaged goods, but lethally adept at their jobs.

There were complaints that the plot was too complicated and somewhat slow. I expect a good detective story to be complicated, and I have not seen better action scenes this side of Michael Mann. The shootouts were brutal and extended. Perhaps the show in general was on the weird side, but not really, because the first season was plenty weird.

I think the simple problem is that people got caught up in the freshness of the first season. There is nothing like your first love. I will admit that I have no complaints with Season 1, and Matthew McConaughey was spectacular, but Season 2 is rewarding because it was not a predictable retread. The dread, tension, and suspense are just what I was looking for. The extended final episode silenced most critics with its elaborate payoffs of everything that came before. Frankly that extended take from Season 1 that everyone has raved about was far from perfect. I liked it, but not after I heard about it 900 times. The true common thread between the two seasons was that the super-rich get the last laugh. That shouldn’t surprise anyone. The rest of our characters wallow in delicious tragedy, which reached positively operatic proportions.

The ratings were better overall than the first season, so HBO is not complaining. Season 3 is on the way.

It has been suggested the inscrutable mystery of the show would play better in the binge fashion that Netflix encourages. I say binge away. I will be binging on True Detective Season 2 a few more times.