Posted in: No Huddle by Jeremy Butler on September 14th, 2015 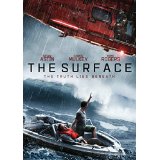 Two strangers lost at sea. What to do? What to do? Well, in the case of The Surface, the thing to do is be suspicious of one another and stay on opposite ends of the boat. Or at least that is how we begin. As expected when there is nothing to do at sea and you are trapped, the only recourse is communication and to question the choices that brought you to this particular situation. Trust me, there is plenty of reflection in this tale of two strangers thrown together by circumstance and forced to work together to overcome physical obstacles as well as a few emotional ones.

It took a minute to get my bearings with the story, as the beginning is not big on dialog. The story is almost ten minutes in before the first word is uttered. Instead it focuses on Mitch (Sean Astin) as he goes through basic tasks such as getting up, preparing a pack, and readying his boat before leaving his home. His first stop is to his mother at a treatment facility. Due to his mother’s Alzheimer’s, Mitch engages in a one-sided conversation which gives the first indication into his life, revealing an undercurrent of sadness. I at first surmised the reason for the sadness was his mother’s situation; however, as the film progresses, it is abundantly clear that the reasons go much deeper.

After his visit, Mitch takes his father’s boat out into Lake Michigan, where he enjoys a brisk ride across the vast waters until debris from a downed aircraft brings his boat to a halt. Surveying the debris, he comes across Kelly (Chris Mulkey) clinging to a piece of the plane to keep afloat. He pulls the unconscious man aboard and renders aid. As the man regains consciousness, the first thing he does is pull a blade on his good Samaritan. That’s gratitude for you, I guess. Disoriented, Kelly demands answers about their current situation, and more graciously than I would have been, Mitch supplies them, explaining how he came across him and that the boat was damaged because of the debris, resulting in them being stranded at sea. Without a radio to call for help and Kelly being immobilized, it is left to Mitch to attempt to paddle them to shore and hope to be spotted by a passerby.

As time goes by, the two men are forced to share what brought them bought to their current situation, revealing that neither man was simply out there for enjoyment. Their relationship, originally adversarial, quickly changes as both men supply each other with their own life experiences, which lends new perspective to the others problems.

A pretty good story, albeit trying in some areas. The flashback sequences did a good job of filling a bit of the gaps left in the beginning such as the reasons for Mitch’s depression and why Kelly was flying so low when his plane crashed. The relationship between the two leads, though it did soften somewhat, never really lost the adversarial nature established in the beginning. A little more softness would have helped with the idea of a life-changing experience that was set forth in the conclusion. As it is, the idea of such an experience is a bit of a hard pill to swallow. Especially due to the inconsistency of Kelly’s argument when trying to help Mitch. One minute he offers sound advice; then he somewhat condemns the action he wants to take. Also it takes a while to understand Mitch’s motivations as he spends the beginning of the film kind of speaking in riddles. It’s clear that he is truly to rationalize his past, but still he would have been better off  just to have come out and said what he was feeling instead of beating around the bush. That said, I do believe the point still does get across. The two characters do reach an understanding and gain a better perspective of what to do going forward, well, mostly Mitch. The conclusion is a bit ambiguous in my opinion, as we get a satisfactory conclusion for Mitch’s character but not Kelly’s.

A bit of a feel-good movie or motivational story, but all in all still worth a watch. Fair warning: you will most likely find yourself liking one character more than the other, and when you do you may not be overly fond of the other. It all depends on who you agree with more. Personally, I found myself leaning more towards Mitch; granted I did not agree with all his opinions, but the crassness of the Kelly character in the beginning is what won me over to Mitch’s side. Kelly had a longer road to redemption in my opinion, and it was questionable if he was willing to walk the path just yet. However, Mitch would not have turned out as well as he did without Kelly, so in the long run the character was essential to the story.

Jeremy Butler is a film school graduate of the International Academy of Design and Technology. He is been writing for Upcomingdiscs since 2012; however, movies have played a big part of his life for much longer. Favorite genres include horror, science fiction/fantasy, and comedy. Favorite movies are V for Vendetta, Boondocks Saints, Kiss Kiss Bang Bang, and The Godfather.
The Visit Peanuts: The EMMY Honored Collection