Posted in: The Reel World by Archive Authors on October 4th, 2015 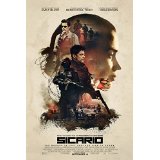 The best way to win a war is to use the element of surprise. Another way is to be brutally and remorselessly ruthless. Neither one of these tactics are something a law enforcement agency is naturally disposed to do. Criminals will always have the upper hand, because they know the law enforcement agencies of the United States are supposed to operate within the bounds of law and rules. That dilutes the potential pool of surprise tactics and also completely limits how ruthless you can be in fighting an enemy. Anyone who knows anything about the Mexican and South American drug cartels knows there is no limit to their barbaric ruthlessness. How can you win against them? One answer appears to be to employ motivated consultants. Find people who know what the game is and know how create plausible deniability. This is not fair fight, so you can’t fight fair. Put mercenaries out there to do a job, and don’t ask questions about what they are doing.

Sicario is a film that bears some resemblances to the Oscar-winning film Traffic including sharing Benicio del Toro as a co-star. Sicario is far more focused on in-the-field drug battles and only peripherally deals with the politics.

The central character and the closest thing to a conscience in the movie is FBI agent Kate Macer (Emily Blunt, who is becoming a “macho” action star after Sicario and Edge of Tomorrow). She starts the movie spearheading a SWAT team in an Arizona neighborhood that reveals a house full of bodies sealed up in the walls and booby trap explosives. This is a perfect example of unhindered ruthlessness. Agent Mercer has been kicking doors her whole career and is highly regarded.

This latest raid was successful but did lead to the lost of some officer’s lives. Mercer and her partner, Reggie Wayne (Daniel Kaluuya) are called to a high-level review. Mercer is concerned, but it turns out she is given something of a promotion by being recruited into an elite unit answerable only to the highest levels.

Matt Graver (Josh Brolin) is her immediate supervisor in this unit, and his style appears to be very loose and practical. Macer is something of a straight arrow and is full of questions but is told to just relax and observe. Macer is even more curious about Graver’s associate, Alejandro (Benicio del Toro), who is a man of few words and who apparently was previously a prosecutor in South America.

I won’t give much more plot points to the film except to say it is every bit as hard-core an action film and thriller about drugs as a film like Scarface was. In other words, it doesn’t pull punches in it’s depiction of gore and violence that is very much a part of the reality of today’s drug wars. Unlike other recent forays into the genre, Savages and The Counselor, it doesn’t descend into farce. Sicario stays brutally real and completely in touch with the cynical world it depicts. You might be curious about the meaning of the word sicario. It is derived from an extreme splinter group of Jewish zealots who hoped to expel the Romans from Judea 2000 years ago. They were essentially assassins. They used any and all means to achieve their goals. They predated the Japanese ninjas by centuries.

A film like this is full of ethical and moral questions. Sicario presents the reality and then asks the audience to consider those questions. They are very hard questions, and they are questions that our hero Macer must try to answer. Are these things actually happening, or should they happen? It should be noted that the film is brilliantly executed by an extensive cast, upcoming wunderkind director Denis Villeneuve, and legendary cinematographer Roger Deakins. This is not an Oscar-bait film, because it is essentially hard-core action, but it is done with such insight that it deserves to be recognized as one of the best films of the year.