Posted in: No Huddle by Archive Authors on October 14th, 2015 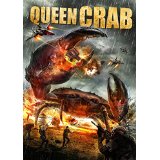 We follow Melissa, a child neglected by her parents, who argue and are consumed by their careers. Melissa meets a crab and adopts this creature as her pet, feeding it food from her father’s science experiment. Melissa loses her parents in a tragic explosion and is taken in by her uncle. Twenty years after the explosion she has become a “public menace”, shooting anyone who comes close to her property, where she keeps the now-giant crab. The crab goes unnoticed until her eggs start hatching and terrorizing people in the woods. When people start killing her babies, she goes on a rampage and starts terrorizing everyone who was unlucky enough to touch her children. Can Melissa keep her friend from destroying the town?

The interesting thing about a piece of schlock film is that I can’t judge it on how bad or good certain qualities are. I have to judge it on how “good-bad” it is. If you aren’t tipped off by the DVD case, the title screen will certainly inform any audience member that this movie is not going to be a “great quality picture.” There are going to be cheap effects, cheap sounds, and cheap actors throughout this movie. The script is going to describe enough to get a simple point across, and that is about it. This is true for all schlock pictures, but since I am thoroughly entertained by schlock, I have to go with ratings and feelings I have during the runtime.

Let’s start out with good-bad, then go into the good and bad. The good-bad in this film most assuredly comes from the acting and the effects. Most of the actors shoot for the fences with the performances they give. Deputy Sonny had me rolling around laughing at how he can’t quite grasp the concept of portraying a bad guy. He always has this tone of “oblivious nice guy” when doing something particularly evil, most notably when he starts putting his hands on women. When he tries to fight our blonde “hot girl” of the movie, he has this tone in his voice that says, “What? I didn’t know this was bad.” The weird thing is that it works. It may have been way over the top, but I guess a truly evil man wouldn’t exactly know if he was doing something evil. The next character is Sally May. I love Sally May. She is this stocky woman who is never seen without a shotgun or a cigar in her mouth. She is the embodiment of “woman you don’t want to mess with”; then she is torn in half by the crab! It took all of my energy to not scream at my television with laughter and anger.

The effects in this are priceless, as in so bad that I couldn’t help but find them endearing. The computer monster crab was great and all, but what I am mainly speaking about are the moments where toy crabs are utilized. When we see the crab, before it gets big, it is stuck in this state where we are shown an actual crab (or toy crab), then we are smacked in the face with a computer animated crab. The crab goes from not looking real at all, to not being real at all, and it just tickles me in all of the right ways that only schlock can. Another effect I love is the scene where we are shown a man “picked apart by baby crabs”. The effect itself looked like they covered a skeleton prop in old, wet tuna, but the line ”what’s left of his face” sent me over the edge. There was nothing left of this man’s face; that line should never have made it past post. The fact that it did was a happy mistake that made me happy.

Of course we are also treated to the bottom of the barrel when it comes to sound effects and music as well, and it fits the scenes perfectly. I am sure I have heard the sound used for the crab in every other low-budget movie trying to portray aliens, spiders, or some other gross animal. It sounds just like the sound used for The Fly in The Fly. This stock sound is like using a general bee-sound effect for a killer bee movie, except that this sound effect is universally marked for those creatures that don’t necessarily have a sound you can pinpoint. The music just reminds me of old cinema mixed with soap opera. During the drama scenes, it isn’t just tense, it’s INTENSE! During the happy scenes it isn’t just joyful, it’s THE HAPPIEST YOU HAVE EVER BEEN! The over –he-top music mixes well with the over-the-top acting and makes this entire movie come together.

The good and bad in this movie are separated by something that just stood out as exceptional in either column A or column B. The main actress does a great job in this, and I can only hope that this leads her to something with a higher budget, because she doesn’t belong in schlock. Every emotion fits to what her character is supposed to be feeling, and she isn’t trying to portray the most or least amount of that emotion. She is completely in the middle and hits the sweet spot for emotional range, making her stand out as the one person who was doing their job exceptionally well. The bad I have to mention is the audio. With me going into a movie like this already having my expectations lower than usual, it should be a special case where I have to point out something atrocious. The audio in this is awful. There are times I can’t here dialog at all. There are times when I can hear one person speaking, but can’t hear anyone else. Almost all of these times take place during the scenes in the bar. I had to replay every scene that took place in this bar in order to catch what a certain character was saying. Sometimes if my volume was too high another character would have a higher level of audio, then be way too loud. I’m used to sound effects being thrown off from the dialog, but it is particularly bad when I can hear one character perfectly, and the other character seems like they are mute.

In the end, this will make a nice addition to your collection of good-bad horror movies. The audio may be worse than you are used to, but everything else is terrible in a great sort of way. I know I won’t be able to just watch this movie once, so you should definitely pick it up.

Exclusive Interview With Johnny Messner Of 4GOT10 Contest: Win The Leftovers Season 1 On Blu-ray from Warner Brothers