Posted in: No Huddle by Archive Authors on October 24th, 2015 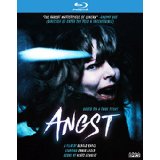 As far as a synopsis for this movie goes, there isn’t too much to it. We are given a brief look inside the mind of a real-life serial killer. A psychopath has been given a conditional release from jail and is only interested in satiating his lust for killing. After some failed murder attempts, the killer finds an empty house and waits for the occupants to come home.  This movie has a lot to say, while being easy to summarize. The story is basic, but there is so much more to it than just the events that take place. It does a great job at making the killer seem more human when we see how clumsy he is at killing people. During the killer’s beginning inner monologue, he states, “this time he won’t get caught,” which, I thought meant he had some grand scheme in place to kill a bunch of people and never see the inside of a jail cell again. The killer actually has no plan; he gets caught up in his passion for murder and bumbles almost every one of his attempts; for instance, when he is caught untying his shoelace the shoelace is in the condemning position used for strangling someone. I also like that the inner monologue of our killer matches the person he is killing; it makes it seem like he is offering an explanation of why he is killing this certain person. When he kills a man in a wheelchair, he starts speaking of his father/stepfather; when he is tying up a young girl he is talking about his sister, etc. This movie is the closest thing to describing to the general public why certain killers do the things that they do, and it is the most disturbing thing I have seen in a while, which makes it an amazing horror movie.

If I were to purely gauge this movie on its ability to scare me, it would get a 1.0; if I were to gauge this movie purely based on how much it unsettled me, it would get a 5.0. This movie is the only film that has ever made me want to look away from the screen. One scene in particular was extremely hard to watch, and that is when the murderer is killing a mentally handicapped man. The killer starts by trying to strangle the man with his own tie; during this time the man thinks that the killer is his father. You can tell that the man has no idea what is going on, making it seem like the man thinks this is a game. After the killer’s unsuccessful attempt with the man’s tie, he then proceeds to try drowning the man in a tub. The mentally handicapped man still looks like he has no idea what is going on until he can’t breathe anymore. The sudden shock of the man’s realization that he is about to die, mixed with the reactionless look on his face beforehand, made it feel a bit more real than I was capable of watching. I forced myself to watch it, but it made me feel grosser after seeing it through, which is amazing for the “realistic interpretation of a killer” that this movie was going for.

This movie wasn’t perfect, but it came very close in a lot of areas. The only things holding it back from being one of my top horror movies was the reactionless shots from people. In a lot of scenes there were people deliberately filmed who weren’t reacting to anything going on around them. When we are in the house with the killer, there are several shots with the mom in the background not doing anything. I’m not talking about not doing anything to stop the killer; I’m saying not doing a thing, just standing in the background emotionless. The same thing happens at the end when people see “something” in the trunk of the killer’s car. None of them react; none of them do much of anything, it just fades to an audio tape of a psychological diagnosis for the killer. While I like the diagnosis, I still wish there was more emotion from the supporting cast, and I wish I knew why the director made the choice to have a deadpan supporting cast.

Even if the supporting cast left something to be desired, Erwin Leder as the psychopath was absolutely perfect. He barely has a line in the entire movie, but the way he moves completely sells me on him being a serial killer. The way he walks is a bit deranged, with a small hobble to each step at some points or with a small skip to his step on other points. There are little twitches that give him the sense of being deranged, like the way he holds something or eats. All of his movements culminate into something that makes me feel like he is the most convincing serial killer I’ve seen in cinema. He doesn’t overplay the crazy, but he also doesn’t seem to be completely normal. The best way to describe this is if you had a weird kid in your class growing up that didn’t speak to anyone, the actor is playing a version of that kid, just as an adult.

This movie accomplishes exactly what it set out to accomplish. It unsettled me, made me want to turn from the screen or grab a bag to throw up in. I can’t recommend this movie enough; the true shock and horror fan won’t ever regret picking this movie up.

Steve Jobs “31 Nights Of Terror” There Is a 13,000 Year Old Black Knight Satellite Orbiting the Earth