Posted in: No Huddle by Dan Holland on December 1st, 2015 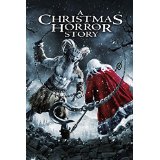 I absolutely love it when I go into a film blind, save for my expectations after looking at the cover, and leave with a surprisingly pleasant experience. A Christmas Horror Story provided me with that exact experience. The cover depicts Krampus, the evil Christmas beast of German folklore, battling Santa in a snowy, mountainous area. This particular battle does not surface until the final moments of the film: instead, we are treated to three separate horror tales that are connected by the various characters that occupy them. Each one of the tales does a good job of maintaining the Christmas theme in creative ways.

Each tale takes place in the city known as Bailey Downs, with the exception of one tale taking place at the North Pole.  First, there is a ghost story featuring a murder that took place at a school the year prior on Christmas Eve. Three teenagers decide to break into the school and film a documentary about it. They are able to break into the school with a set of stolen keys, provided by a friend who is forced to visit family rather than participate in the documentary. This family trip is interrupted by a visit from Krampus. The next tale involves the recovering police officer who worked the original Christmas Eve murder case: Still on leave, he is spending time with his son, who gets lost in the woods and is replaced with a changeling. Finally, carnage ensues at the North Pole, where Santa must battle his own elves who have been stricken with an odd form of vampirism.

All of these tales are intertwined, and we cut between the tales throughout the course of the film. Finally, a constant between all the tales, and probably the funniest part of the film, is a radio show host, played by William Shatner. Between his presence on radios within the film and the ways in which certain characters are connect to more than one tale, it was very well done. It gave the film a level of sophistication that you do not typically see in horror comedies. Also, by far the greatest connection made in the film is that of Santa and the North Pole being connected to the city of Bailey Downs. It is way too good to spoil, but I will entice you to go watch it by saying that it involves Shatner’s character.

Now, as I sing praises about the unexpected sophistication I saw within the film, you may be wondering why it only received three stars. While I did enjoy the film, it is unfortunate that its very structure made it a little hard to watch. While I believe that connecting each tale is absolutely brilliant, the connections were a little weak for the length of the film. If the film were a little shorter, say an hour and a half, I would have been more accepting of the weaker connections in the stories. However, the issue I have is the fact that the film just feels too long. A lot of the scenes feel unnecessary and could easily be replaced by a stronger explanation for the connections. In other words, I would rather have spent some time understanding why the connections are important to the story, rather than how the connections came to be. The film would be much more engaging.

Overall, the film was a lot of fun. I am rarely startled by jump-scares, and this film actually got me more than once. Each tale told focuses on a particular anxiety, and conveys the tension within the anxiety very well. Whether it is the anxiety of familial issues, struggling with impotence, or just general psychopathy, the amount of thought that goes into each of the individual tales is excellent. It is definitely one of my favorite Christmas-themed horror films to date, and it is certainly the most complex I have seen in the genre. A Christmas Horror Story is a must-see for the horror fanatics who want to get into the holiday spirit.