Posted in: The Reel World by Archive Authors on December 27th, 2015 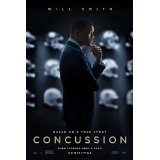 Football is extremely important to many (or most, or all) Americans. That would be an understatement, since football is a national obsession that can reach the level of mania at times. Football is close to a religion for some people. You don’t mess with football, but that is what Will Smith’s new film, Concussion, does. It tells the true story of a Nigerian doctor who has an extremely rigorous and conscientious approach to his work performing autopsies in the Pittsburgh coroner’s office. He supervised over the deaths of Mike Webster, Terry Long, Justin Strzelczyk, Andre Waters and Dave Duerson, who all died before the ages of 51. These autopsies were instrumental in uncovering the connection to a disease that had been associated with boxers, Chronic Traumatic Encephalopathy (CTE). The connection with boxing was never made by the National Football League until Dr. Bennet Omalu, played by Will Smith, starts going to extraordinary lengths to investigate. Numerous lawsuits have occurred since 2008 when Omalu began this work showing that the NFL had covered up their knowledge of this issue. The main outcomes many players suffer are dementia, depression, and suicide. His one early ally is his boss, Cyril H. Wecht, MD, JD (Albert Brooks). Wecht supports Omalu despite growing opposition and expensive testing. The testing initially exceeds $20,000. Omalu pays for the tests out of his own pocket, because he is driven by a search for the truth despite the growing obstacles he faces. The opposition starts to rise to levels of potential death threats and pressure from all sorts of law enforcement agencies including the FBI to stop the testing. Corruption in the NFL is evident in their use of the name of football to exert influence on everyone and anyone to protect the sanctity of the game. The movie starts to play out like a medical thriller, but this is a true story.

Alec Baldwin (30 Rock), Stephen Moyer (True Blood), Eddie Marsan (Ray Donavan), Arliss Howard (Full Metal Jacket), Mike O’Malley (Yes, Dear), and Paul Reiser (Mad About You) all play doctors on the various sides of this issue. There is a change in regime in the NFL when Roger Goodell (Luke Wilson) comes in as the investigation starts to pick up traction.

Part of the film is devoted to Omalu’s personal life, of which he has none until he is persuaded to take in an African nurse who is trying to become an American citizen. The gorgeous Gugu Mbatha-Raw (Belle) moves in and is treated with complete and utter respect by the scrupulous Omalu, but he is only human.

The film is over two hours long and is handled in a somewhat somber and serious fashion. The lighting is dark, and the pace is slow but relentless. Will Smith has an African accent in the film, which he handles well enough. It doesn’t really make you think he’s not Will Smith. He has already received a Golden Globe nomination for the role, so we know they are shooting for another Oscar nomination.

The film is not a feel-good movie. If you are a big fan of football, you will probably come out somewhat angry, and if you are a mother whose son plays football, I would say this is a must-see. I just wish that the film didn’t seem boring sometimes when the subject is clearly so important.