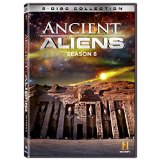 Season 8 starts with the very roots of the ancient astronaut theory. The first episode deals with prehistoric civilizations and the idea that humans and our modern technology all go back far longer ago than is commonly believed. Perhaps humans go back thousands of years before any record. We’ve been here many times before with the show, and it’s the basic principle behind the entire 8-year run of the series.

Another episode proposes that rocket scientist Wernher Von Braun had access to alien technology. Of course, there has already been a show about Hitler’s possible connection to aliens, and Von Braun was once one of his top rocket minds before he defected. There’s speculation that the aliens might even want to help NASA. The big evidence here is how we went from horse and buggy to landing on the moon in just 60 years. Of course, if the aliens really were helping us out, why haven’t we gotten beyond the moon in the next 50 years? Maybe they’ve fallen down on the job.

A look at modern robots invites speculation that they existed thousands of years ago. Of course, credibility is lost when the narrator refers to Mars as our nearest alien planet. That distinction actually belongs to Venus in all but very rare moments. The last time Mars was closer was for a few days in August of 2003. A pretty fundamental mistake for guys who want us to take a leap of faith with their take on the facts.

Ancient Aliens wants to call you to the Dark Side with an episode on the idea that evil might be an alien influence. They speculate that guys like Bundy were under this alien influence just like demonic possession. We’ve had the material on angels and demons before, and it’s repeated here for good measure.

Humans sharing DNA with aliens has also been covered here several times before. Everything from genetic manipulation to a little alien-human hanky-panky has been suggested. This episode adds the idea of a common ancestor and the idea that we might have been seeded on this planet as part of an alien plan to colonize the universe. We get the same material of ancient depictions of reptiles or birds in human form found on walls and manuscripts. We’re told there’s no reason for them to draw beings they’ve never encountered. Have these guys seen The Avengers or Star Wars? Stories, both fantasy and myth, have existed for as long as there have been people and are the most likely things to be left from even our civilization one day. I hope some future being doesn’t think Spider-Man was really swinging around New York City.

Another Earth dominates one episode, while sea creatures take center stage in another. And what would a season of Ancient Aliens be without a good helping of crop circles? There’s more on that laser war fought over the skies of India and the idea that aliens are keeping a close watch on our nuclear weapons facilities. The question arises that the Van Allen radiation belt that does indeed protect the planet from harmful cosmic radiation is not a naturally occurring phenomenon. The aliens put it in place to protect us. That was nice of them.

The final episode proposes that the hostility in places like the Middle East is caused by aliens who want the people in that region to fight so that they won’t turn their attention and resources to finding the cache of evidence under their desert sands. Apparently, Saddam was aware of these alien treasures and hoped to find and make use of them as Hitler is alleged to have done decades earlier. All good crazy evil dictators must think alike.

I don’t really buy into most of what is reported here. That doesn’t mean that it isn’t interesting. It also doesn’t mean that the questions aren’t quite thought-provoking. We all have questions about the ancient world. Without the invention of time travel, all that we are left to do is speculate. That doesn’t mean it isn’t fun and entertaining. Definitely check it out. While I did find much of this very interesting, I remain quite skeptical. I do believe life exists somewhere else. I even believe it’s possible we’ve been visited. I’m just not sure I buy the whole Ancient Astronaut Theory. But it’s all in good fun. I just wished there wasn’t so much redundant material in these episodes, often repeating things from the previous episodes. Of course, it holds down episode costs to repeat images and stories over and over again. I’m sure the show’s crew would deny it. “Ancient astronaut theorists say yes.”

Gino Sassani is a member of the Southeastern Film Critic's Association (SEFCA). He is a film and television critic based in Tampa, Florida. He's also the Senior Editor here at Upcomingdiscs. Gino started reviewing films in the early 1990's as a segment of his local television show Focus. He's an award-winning recording artist for Omega Records. Gino is currently working on his 8th album Merchants & Mercenaries. Gino took over Upcomingdiscs Dec 1, 2008. He works out of a home theater he calls The Reel World. Favorite films: The Godfather, The Godfather Part II, The Body Snatcher (Val Lewton film with Karloff and Lugosi, not the pod people film), Unforgiven, Gladiator, The Lion King, Jaws, Son Of Frankenstein, The Good, The Bad And The Ugly, and Monsters, Inc.
Exclusive Interview With Colm Feore From Painkillers Tuesday Round Up: January 12, 2016