Posted in: No Huddle by Dan Holland on February 8th, 2016 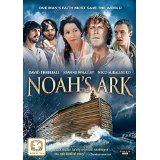 Any person who has attended Sunday school for a length of time is most likely familiar with the story of Noah’s Ark. This tale was recently brought to the mainstream with Darren Aronofsky’s Noah, which took quite a few creative liberties in retelling the story (including strange rock monsters). Given my recollection of the actual Bible story, I want to say that there really isn’t enough content to create a feature film. God warns Noah that there will be a catastrophic flood and asks him to build an ark. Noah builds the ark and suffers ridicule from the people he tries to save, and in the end, the flood takes the world and Noah and the few people who believed him are spared.

Kenneth Glennaan’s made-for-TV production of Noah’s Ark maintains the basic structure I described above, but extends the events that occur in the rising action of the story tenfold. Noah (David Threlfall) lives with his wife Emmie (Joanne Whalley) and their sons. A good majority of the film expands the drama within the family and the resistance of the family to the building of the ark. There is also an additional story arch involving Noah’s youngest son, Kenan (Nico Mirallegro), who becomes obsessed with pursuing his own selfish desires in the city. Only after an hour and twenty minutes into the film do we get to see the flood begin, which really makes the film that much better.

If there is just one thing to watch this film for, it is the acting. The cast was able to take a story that I have heard time and time again since I was a child, and perform it in a way that made it fresh and exciting. In fact, I would call this adaptation my favorite telling of this particular story. Like many other BBC productions that I have seen, it really feels more like a theatrical stage play than a film, and that really makes a difference. Typically, my experience with films that take on characteristics of stage plays is that they do not translate well to cinema. In this production, the camera work and editing communicate so well with the stage direction and the cues given by the actors. It is a little hard to describe, but there is a clear communication between the cast and crew, allowing the finished product to take on an intellect of its own.

Given the amount of drama that the film possesses, there are two factors that I like to evaluate: acting and dialog. Again, I’ll repeat that I believe the acting is fantastic; quite honestly, better than I thought it would be. However, actors can only do so much with the dialog provided to them. While the dialog in Noah’s Ark wasn’t terrible, it could stand to be improved. I applaud the film for maintaining Christian values and beliefs without being overbearingly theological, but some of the dialog just felt too simple. For example, there is a mild debate between God and science. Because this is a relatively contemporary debate, the word “science” just left a bad taste in my mouth each time it was used. The word just sounds too contemporary to fit well within a biblical period piece. The debates within the dialog do make the film interesting, but because “science” is such a sweeping term, the idea that “science” is among man’s selfish pleasures (which include dancing and drugs in this film’s context) ultimately was a detriment to the film.

Overall, I really enjoyed myself. I have to be honest; I wasn’t expecting it to be as engaging as it was. It makes for a great family film and promotes excellent values (Christian or not). I would even watch this film again outside of a family movie night, just because the drama was written very well and the performances, particularly David Threlfall’s. If you were not a fan of the aforementioned adaptation by Darren Aronofsky, I guarantee you will enjoy this production, as there is no extreme fantasy to be had, only an entertaining dramatization.