The Facts Of Life: Season 8

Posted in: No Huddle by Archive Authors on February 26th, 2016 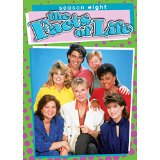 Back in October I wrote about The Facts of Life: Season 7 in which I dealt with the general history and overall dynamics of the show. I suggest you go back and check that out so I don’t cover the same ground twice. The big addition that year was George Clooney. Not many series have as long and healthy a run as The Facts of Life, but as they age changes are forced on them. One of those changes that occurred in the opening episodes of Season 8 is Charlotte Rae’s (Mrs. Edna Garrett) decision to leave the show. The transition is handled gracefully with Edna’s marriage to a doctor who is leaving to help those in the third world by serving in the Peace Corps. This brings her sister, Beverly Ann Stickle (Cloris Leachman) to try and take up the mantle of house mother to the girls. I’m sure everyone knows the girls, named Blair, Jo, Tootie, and Mindy. The main purpose of releasing these programs from the 1980’s on DVD is to relive earlier times in our own lives as much as to see the programs themselves. Maybe mothers want to share life lessons with their daughters from a much simpler and, at this point, almost alien time. The show was part broad comedy and part melodrama, focusing on the teenage girls and their coming of age. The comedy on the show was, frankly, full of hamminess and cheesiness. With so much ham and cheese, you weren’t hungry after one episode, so imagine bingeing on a season of shows. The life lessons learned were basic but well-intentioned and good-natured. On one level, things have changed enormously since the 1980’s, but core values and human decency are still important. It’s hard to find that kind of innocence today in television programming, but it was almost required in those days.

Most of the episodes tend to run together with a predictable sameness with some rising to the top and some sinking to the bottom. One particularly difficult one to watch was an episode with Fabian and Bobby Rydel playing themselves, but then flashing back into the sixties when they were popular. I mentioned ham and cheese, but I forgot to mention corn. This was a lowlight of corniness with the girls playing 60’s teenagers and Leachman as a jaded beatnik. One of the highlights was an episode when the young orphan who was always hanging out with them, Andy Moffett (Mackensie Astin), was going to a heavy metal concert by a group called The Walking Dead. They were ahead of their time on that one.

By the end of the eighth season things were definitely winding down, and there was a sense everybody was ready to move on. The main focus of the season had been to overcome the loss of Mrs. Garrett and assimilate her sister into the show. Leachman is a very talented actress and did a good job, but it still wasn’t the same chemistry. By the end of the season, Jo is ready to leave for college.

There was one more season to go. One would hope things go out with a bang and not the whimper that was this season.