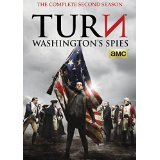 “These rebels, they have no fear, or they have so much they are numb to it. They feel as if they have nothing left to lose, and they hate us who do…”

It’s all just a matter of perspective, isn’t it? As a history teacher I have taught aspects of that event we all recognize as the American Revolutionary War. Did you know that in a British history book I have it is referred to as the Colonial Rebellion? You see, one man’s revolution is another man’s rebellion. Everybody is talking about who will be the next James Bond. It seems we’ve been fascinated by the spy genre since the early 1960’s. AMC has added a new wrinkle to the spy game with Turn: Washington’s Spies. When we say Washington, we’re not talking about the city. We’re talking General Washington, George Washington that is. It’s a revolutionary show about a real-life spy ring from America’s fight for independence. And yes, this series lets you see the war clearly from both perspectives.

Unfortunately, they decided to release the show only on DVD this season. That’s a real shame. The production values are top-notch on this series, and the DVD presentations do not do that effort justice at all. Compression artifact and fuzzy standard-definition discs take away one of the show’s real strengths and reasons for watching. This is a mistake I hope will soon be corrected. Fortunately, production design is not the only asset this series has to offer. There is tight story-writing and pacing to be found here, to be sure. But the cast of characters and actors is a large and compelling one.

On the American side you have General George Washington himself, played by Ian Kahn. In the first season Kahn was little more than a man giving orders and posing as if from one of those famous portraits. Season Two finds him delivering a much broader performance to go with those shoulders. We see a Washington who must first deal with defeat. As the season begins, Philadelphia has fallen to the British and there are many who whisper that Washington is a failure, and Congress considers his removal. This is a man unused to defeat, and it shows. We also get an excellent episode where we see him tortured by a moral decision and haunted by the “ghost” of his deceased brother. Kahn gives us a look at the Father of Our Country as we have not likely seen him before.

Of course, the show isn’t really about Washington. It’s about the Culper Ring, a network of spies the General established to provide him with intelligence in the war effort. Jamie Bell is Abe Woodhull, “Culper” himself. Abe’s father is a loyalist and a Magistrate. His home is occupied by Britain’s Maj. Hewlett (Gorman) with the cooperation of his father, Richard (McNally). Here he is assisted by Anna Strong, played by Heather Lind, who is married to a known traitor and has gone to extraordinary lengths to prove her loyalty so that she could remain helpful in the cause. She and Abe are also lovers, even though both are married to other people. It doesn’t help that May Hewlett has more than a healthy crush on her, and it proves to be his blind spot as the Culper Ring manages to function right under his nose. This season Abe complicates his life even more by offering his intelligence services to Hewlett. It gains him an excuse to hang out in New York, a British stronghold, and to cover his work for Washington. It’s a gambit that will land him in prison, nearly hanged, and even further estranged from his father.

One of the show’s most eccentric and compelling characters is Lt. John Simcoe, played wonderfully by Samuel Roukin. I actually spoke with Roukin last year about the show, and if you missed it, it’s worth taking the time to check it out Here. From Roukin we learn he was originally filmed and intended to be killed in the pilot. Someone obviously thought better of it, and now we have this absolutely brutal and quite insane man who uses his military position to perform all manner of atrocities. He also has strong affections for Anna. As Season One ended, it looked like he had been dealt with, and this season opens with Simcoe a mere clerk. Don’t consider it a spoiler when I tell you that he won’t remain a clerk for long. He’ll end up in command once again, this time with the Queen’s Rangers, a provincial force with even more freedom to act on his brutality. He will also return to haunt Abe, Anna, and even Maj. Hewlett. Roukin is brilliant in the role, and he gets to be the one character who is feared by folks on both sides of the war. This year he has a band of followers that makes him even more dangerous. He’s hands down one of the best characters on television at the moment, and you’ll watch each of these episodes just to see what he does next.

The big addition this season is the introduction of Benedict Arnold, played by The Mentalist favorite Owain Yeoman. He is one of Washington’s most loyal and aggressive defenders when we first meet him. Of course, we know what he becomes, as his name itself would one day come to literally define the word traitor. Yeoman delivers a range he never had a chance to do on The Mentalist. Here he projects a much stronger personality who eventually begins to encounter a wound and circumstances that make him the bitter man that the British are looking to turn. That task falls to another major John Andre, played by JJ Feild. Andre has fallen in love with an industrial magnate’s daughter, Peggy Shippon, played by the enchanting Ksenia Solo, who knows how to act with those incredible eyes. It will fall to her to turn Arnold out of her love for Andre. Yeoman has to be one of the luckiest television actors, playing a character married to Amanda Righetti and now being seduced by Ksenia Solo.

Back in the spy ring, Abe is recruiting innkeeper Robert Townsend (Westrate) with the help of Townsend’s father, played by Star Trek’s Dr. Phlox, John Billingsley. And there are many of those James Bond moments as the ring is provided with its high-tech devices, OK, high-tech for the 18th century. We’re talking invisible ink, toys with hidden compartments, submarines, and even a lie detector, not to be confused with the Jefferson polygraph, also used in the show to copy letters. The show’s Q is Nathanial Sackett, played by News Radio’s Stephen Root.

It’s a season where characters are humbled by captivity or their own conscience. There’s plenty of betrayal and battle for the series to live up to its time period. Extras include deleted scenes and a 5-minute feature on each of the 10 episodes. There is also a feature on the Benedict Arnold, Shippon, and Andre triangle as well as one on Washington and Lee, a relationship that figures into a turning-point clash of armies toward the end of the season. “It’s all a bit of a tail chaser, yeah?”

Gino Sassani is a member of the Southeastern Film Critic's Association (SEFCA). He is a film and television critic based in Tampa, Florida. He's also the Senior Editor here at Upcomingdiscs. Gino started reviewing films in the early 1990's as a segment of his local television show Focus. He's an award-winning recording artist for Omega Records. Gino is currently working on his 8th album Merchants & Mercenaries. Gino took over Upcomingdiscs Dec 1, 2008. He works out of a home theater he calls The Reel World. Favorite films: The Godfather, The Godfather Part II, The Body Snatcher (Val Lewton film with Karloff and Lugosi, not the pod people film), Unforgiven, Gladiator, The Lion King, Jaws, Son Of Frankenstein, The Good, The Bad And The Ugly, and Monsters, Inc.
Maude: Season Four Tuesday Round Up: March 22, 2016