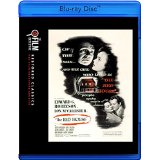 How many films are lost and forgotten over the years? It would be interesting to know how many films have been made since the advent of the movie industry. It is probably in the millions, and yet most of us would probably have trouble thinking of a thousand.

The Red House is probably a film that could be considered lost or forgotten. It stars Edward G. Robinson, who is someone who everyone probably knows and would consider to be a classic American actor. There is an old expression, “There are eight million stories in the Naked City, and this is one of them.”  This film fits well into the tradition of small human dramas of mystery and murder. It’s part of a well known genre in the history of cinema called Film Noir. Robinson’s career was launched by the famous gangster film of the Thirties called Little Caesar, and his resume is full of scary and threatening characters. Sometimes he tweaked people’s expectations by playing characters who were more humorous or weak or full of inherent goodness that would belie the image that Robinson’s reputation represented. As Robinson continued acting, it would be interesting to see what twists in character would occur in an Edward G. Robinson movie. Double Indemnity is that kind of movie and made that same year; The Red House is also that kind of movie.

The main setting is an isolated farm where Edward G. Robinson lives with his wife and teenage daughter. The daughter is pining after a boy at the high school and gets him to work for her father. A very young and enticing Julie London plays another girl with her sights on the young man. A local young stud, played by Rory Calhoun, figures he’s a much better match for someone as pretty as Julie London. But the biggest question in the film is what secret is hidden in the woods that Edward G. Robinson wants no one to discover. It becomes more and more obvious that Robinson will stop at nothing to keep what is in the woods secret.  Oscar-winning actress Judith Anderson (Rebecca) plays the supportive mother figure, and her subtle and controlled expressions reveal little. The secret is clearly making Robinson live two lives. He is both a loving father and husband and clearly someone who did something dark and disturbing that he must hide from nearly everyone. The one person who might know something more is Rory Calhoun, who Robinson has given hunting rights to the woods where the secret lies. He has been told that anyone who trespasses there should be warned to stay away in no uncertain terms including warning shots that can whiz by an intruder’s skull. At one point Calhoun takes numerous sniper shots at the daughter as she wanders close to the mysterious red house in the woods. Clearly the potential for disaster looms over the story. Will the daughter get the boy, or will it be the fetching but manipulative rival? Will the daughter find out what’s in the red house? Will the reckless stud kill someone with his rifle? What is the secret, and what will it mean for Robinson if it is revealed? Will his safe little world unravel as he becomes more and more unraveled?

The director is Delmer Daves, who has a nice reputation among film fans as a successful and prolific writer/director of every type of film, most notably 3:10 to Yuma and A Summer Place.

Enter The Film Detective. Founded by Philip Hopkins, the organization has made it something of a mission to re-master old cult favorite films for broadcast and the high-definition video market. They have a working library of about 3,000 titles. Now some of those films are making their way to Blu-ray, many for the first time.  There are countless untold films that are lost forever, so we have to be grateful  for every film that is saved; still, in this case I was left wanting more. I am constantly going to the library and finding new restored deluxe editions of every kind of film imaginable, and many of them have hours and hours of extras. These resources were never available before, and they act as a virtual film school. Ultimately it is becoming a matter of time to absorb the enormous amount of material out there. The real treat in this instance is that this film is like a giant pearl that was buried at the bottom of the ocean. It was barely remembered until it gets uncovered and is polished so it can shine again.