The Nanny: The Final Season 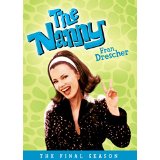 When we last saw Miss Fine (or should I say Mrs. Sheffield), she fell off her husband’s yacht on her honeymoon. I have previously written about The Nanny: Season 5 in January and Season 4 in September of last year, so go back and look up all the previous shenanigans. The first episode of the final season has the newly married couple stranded on a deserted island, and Fran Drescher is up to her usual ridiculous antics as Fran Fine. You can expect a lot of silly and moderately racy sexual innuendo. As usual, there are lots of celebrity cameos. In one Hollywood Squares episode alone, there are nine celebrities interacting with Max Sheffield (Charles Shaughnessy) who is one of the squares. Fran is trying to get pregnant, and she has to climb up to get Maxwell because they have to follow a strict time schedule. Then since these episodes take place in 1999, there is an episode with Hillary and Bill (celebrity impersonators) which is an embarrassment for all involved. We get Aunt Frieda (Lainie Kazan), who is still obsessed and upset that she didn’t get to sing at Fran’s wedding. Frieda finally gets to sing, and Lainie has a fine voice. Another person who gets to sing is Fran’s father, Morty (Steve Lawrence). He also sounds great. We have never seen Morty before in the previous seasons, but in a very special episode, Sylvia (Renee Taylor) is seeing a hot doctor (Joseph Bologna, Renee’s real life husband) and everyone thinks she is cheating on Morty.

Then there is the constant rivalry between Mr. Sheffield and Sir Andrew Lloyd Webber, which culminates in a fight for the rights of Yetta’s Letters (don’t ask, but Yetta (Ann Morgan Guilbert) is Fran’s absentminded grandmother). Then there is time for another wedding when Maxwell’s little daughter, Maggie (Nicole Tom), grows up and gets married to an empty-headed male model. All of this leads up to the two-part series finale which juggles two disparate story lines. Niles (Daniel Davis), Maxwell’s fey butler, and C.C. Babcock (Lauren Lane), Maxwell’s business partner and jealous lover, reveal that their six seasons of hatred and insults was actually covering deep animal magnetism. Will they or won’t they stop treating each other like idiots and finally give into deep burning passion? Then we have Fran at Maggie’s wedding, very close to her due date when she gets stuck in an elevator with C.C. Babcock. I don’t have to tell you what happens next. Well, I could, but I won’t. We do finally get to find out what C.C. stands for.

The good news is that it was clear that this series knew that six seasons was enough, and they closed out all the story lines satisfactorily. The bad news is that it was because the show was running out of steam. We always know that shows that end the sexual tension of two characters who finally get together won’t last much longer after that. It was a silly show that was different from any other while basically being a culmination of standard sitcom traditions. It was slightly edgy at the time but now looks fairly quaint. It also was very much of its time with big hair and shoulder pads. Like the theme song from the show states, she was “the flashy girl from Flushing, the nanny named Fran” who finally got her man. After the end of the final episode, everyone actually comes out on stage and gives a bow. It was a nice touch that ties up well with a show about a Broadway producer. It was a happy ending for Fran and the cast, and, probably, all the fans of the show.