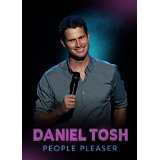 Daniel Tosh is known for his no-holds-barred approach to stand-up comedy. His latest special, People Pleaser, is no exception: He even admits that he makes a living out of saying outrageous things in the middle of this act. Although he is often criticized for delivering racist and misogynistic humor to the young, white male demographic, Tosh gracefully disagrees through this persuasive performance. Having already seen two of his prior specials, I must admit he hit a beautiful stride in his fourth special that I really wasn’t expecting. There is an impressive retention of attitude and abrasiveness, but he added a large amount of metacognition to his act that forces the audience to really think about his performance.

More often than not, Tosh’s sets start with rather offensive jokes, and from there, he barrels his audience further down into a pit of taboo topics and suggestions. I find this style of performance to be extremely tasteful. Not only does he introduce these taboo topics (such as death, homelessness, being pro-choice, feminism, among other “hot” topics) to make fun of them, but he presents them to the audience in a way that they are forced to think about both sides of the argument. However, Tosh’s presentation is extremely juvenile, as always. I would argue that this practice of performing his material from inside the mind of a 17-21 year old male is the reason his material is so polarizing.

Tosh performs jokes that are simplistic and brash, but have intense philosophical skeletal structures. With that being said, it takes an active mind to appreciate Daniel Tosh’s humor. If you are offended, you are not getting it because you cling too tightly to your ideologies. If you are laughing because he is making fun of whatever side you are opposing, you are also not getting it. If you really pay attention to his delivery, you will begin to notice that Tosh never really takes a side. He will only introduce the idea, let the crowd react, then comment on both sides of said idea: It is very much a brilliant exercise in crowd work.

Although I could praise Tosh and his hidden philosophical tendencies ad nauseum, I do take issue with the physical craft regarding this particular special. In this new age of one-hour comedy specials being released as Netflix exclusives, the bar of incorporating elements of filmmaking has been (and continues to be) raised. No longer can I watch a stand-up special without expecting creative camera movements, camera placements, editing techniques, etc. Not that this particular production does not practice polished filmmaking techniques: for all intents and purposes, this is a solid Comedy Central production. However, I can say that I would have enjoyed this production much more if it had followed in the steps of Eddie Peppitone: In Ruins, Tom Segura: Mostly Stories, or Doug Benson: Doug Dynasty, to name a few. Each of these productions were produced in the last two years and demonstrate compelling filmmaking techniques that complement the comedian’s style of delivery. The “One Hour Special” genre of comedy film is currently shifting towards a promising, independently produced future.

Overall, I really did enjoy People Pleaser. If anything, it improved my opinion of Tosh as a modern day philosopher, and I’m a little disappointed in myself that I hadn’t seen it sooner. If anyone harbors ill feelings towards Tosh from his television show or previous specials, I encourage you to watch this new special with an open mind. Daniel Tosh only facilitates your thinking and emotions: It is up to you as a viewer to really understand the way you think or feel about these sensitive issues.