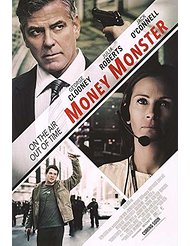 Hollywood has a long-running reputation for doing films about the little man taking a stand against corporate greed.  Not only does everyone seem to like an underdog story, but when a story comes along where the everyday blue collar worker gets to go head to head against pharmaceutical companies, or Wall Street in general, it’s a no-brainer this could have commercial appeal.  Films like Mad City, John Q, and last years The Big Short are all films that seem to have an influence on Money Monster, but what would it bring to the table?  With Jodie Foster (Little Man Tate, The Beaver) at the helm and with George Clooney and Julia Roberts leading the cast, this was a film that grabbed my interest, but following the release of the trailer, I felt I already saw the entire film in a matter of three minutes. Or did the film have a few surprises hiding up its sleeve?

From the moment the film starts, it wastes no time getting the story rolling as we meet Lee Gates (Clooney), a flashy over-the-top host of a stock market show.  Lee is everything you’d expect him to be, living in the world of Wall Street trading; he’s a brash egomaniac who thrives on greed.  It’s easy to see that it’s his personality that is driving his director Patty Fenn (Roberts) into taking a job at another studio. Clooney and Roberts have a great onscreen presence together. We don’t get a lot of time where we get to see them share the same camera space, but nevertheless these two pull off their relationship as we see them interact in the hustle and bustle of working in live television.

For Gates this is a big day; not only is this his last day possibly working with Fenn, but the big news is that a stock that Gates pushed heavily took an $800 million hit overnight.  Little does Gates know, this hit is going to come a little closer to home than he’d like once a man stumbles onto the cast during a live broadcast with a gun in hand.  The young gunman is Kyle (Jack O’ Connell), who is taking the stage because he wants answers for what happened to his stock that Lee endorsed as being the safest investment anyone could ever make.  Kyle goes on to strap a bomb to Lee with the threat that if he doesn’t get answers, or if the studio pulls the live feed, that he’s going to release the trigger and set off the bomb.

While the front half of the film follows the typical hostage film by the numbers, what keeps us engaged are the performances from Clooney and Roberts as their interactions are through an earpiece that Lee has.  Where the film starts to stumble is where all parties involved with the show work on trying to uncover what caused “the glitch” that is responsible for this financial collapse.  No matter how you film it, or what music bed you lay down, making numbers and algorithms sound thrilling just isn’t going to work with your casual audience.  Where the film continues to stumble is with its villain Walt Camby (Dominic West), who is the head of the company that has taken the massive hit.  For starters he’s a man of mystery for a large portion of the film, and when he is revealed we get nothing more than the corporate scumbag we’ve expected with nothing more than greed as a motive.  This is frustrating,  because the film attempts to ground us with very real characters with layers, yet we’re offered a villain who is so one-dimensional; it’s sad that West was given nothing to work with.

The biggest misstep that the film suffers from is when they use the third act to leave the studio.  What worked so well was the claustrophobic settings where we felt the characters had nowhere to escape to.  The self-contained setting is what added pressure to the situation where all eyes are on Lee as viewers continue to tune in.  The moment we see Lee and Kyle together on the streets of New York, the suspense is gone.

Despite the film’s hang-ups, Money Monster is still a fun popcorn film that is smarter than the typical summer fodder that seems to be only geared toward teenagers.  The film certainly has its moments where it can be funny as well as thrilling.  This will rake in the cash and give Clooney and Roberts the hit they’ve needed, and hopefully this will spark interest in reuniting these two on another project in the near future.  Its unfortunate the trailer gives so much of the story away, but the performances from Clooney and Roberts will satisfy most fans and leave them walking out of the theater with a smile and checking their stock portfolios as well.

“What is my life worth to you?”

Brent Lorentson is a horror writer and film critic based out of Tampa, Florida. With a BA in Digital Film, he co-wrote and co-directed Scavenger Hunt. His short stories have appeared in various horror anthologies. In 2019 his short script Fertile Blood will be a part of the anthology horror film Slumber Party. He is currently working on his first novel A Dark and Secret Place set to be released in late 2019. Favorite Films: Taxi Driver, Fight Club, I Saw the Devil, The Wild Bunch, Dawn of the Dead, A Clockwork Orange, Pulp Fiction, Heathers, The Monster Squad, and High Fidelity.
Have Gun Will Travel: The Complete Series Tuesday Round Up: May 17, 2016