The Jim Gaffigan Show: Season One 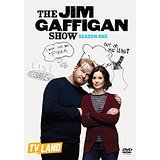 In my experience there are three types of comedians: 1.) Ones that are good at standup but bad at a series 2.) Those that are good in a series but not so great at stand up. 3.) Those who can do both. Want to guess which one Jim Gaffigan is? The standup comedian, known for his clean brand of comedy, gets his own series loosely based on his life. He’s a bit of a slob, he’s occasionally lazy, and he is without a doubt addicted to junk food. Rounding out the season are a group of instantly recognizable stars like Chris Rock, Steve Buscemi, Hannibal Burress, and Macaulay Culkin…or is he Macaulay Culkin? (Inside joke, you’ll get it once you watch).

Gaffigan plays a fictional version of himself, a popular standup comedian living in New York with his wife, Jeannie (Ashley Williams, How I Met Your Mother), and their five — that’s right, five — kids in a two-bedroom apartment. I’ll give you a moment to wrap your head around those cramped quarters of theirs. While balancing his career and parental responsibilities, the family searches for a larger place with the help of Jeannie’s gay best friend/former boyfriend Daniel (Michael Ian Black, Wet Hot American Summer) who is in real estate and hates Jim. Along for the ride is Jim’s immature, opinionated, insensitive best friend and fellow comedian Dave Marks (Adam Goldberg, NYC 22). This season deals with Jim’s perception in public with regards to his religion and his role with his kids, as well as vasectomies, and his obsession with junk food. There is even an It’s a Wonderful Life-themed episode.

Remember what I said about comedians falling into three categories? Well it’s safe to say that Gaffigan belongs in the versatile group. I am not fluent in all his standups, but I have familiarized myself with his routine through YouTube and his brand of clean comedy, which is transferred into the series. It’s actually a big component of the show and a source a wise cracks from several of his more raunchy fellow comedians, especially among the guest stars who frequently ask him if he has come up with anymore food jokes. (Gaffigan insists that he talks about more than food.)

They say the best comedy comes from real life and, after watching this season, I know that to be true. Gaffigan’s living situation — as well as other various plot themes — originate from reality. That is truly the series strongest point…its ability to keep itself rooted in reality. Too often the audience is enamored with unrealistic plot devices that they are unable to relate to. However, when you draw from things you know, the audience is able to nod and say, “Yep, I’ve been there.”

Playing a fictional version of himself, Gaffigan is very compelling as he drives the story forward. He is essentially in every scene of the show. (Naturally, since it’s his show.) The more important question: is he the funniest member of the cast? I’m betting that is what everyone wants to know. It is a tough race, especially given the huge competition within the regular cast and the special guest cameo appearances. (Hannibal Burress was in rare form during his albeit brief appearance.) I feel that I can honestly say that Gaffigan is indeed the funniest member of the cast, but — because there is always a “but” — it is through his back and forth with rest of the cast that his best material comes through. (Especially with the antagonistic relationship between he and Michael Ian Black.) Adam Goldberg was stiff competition in the first couple of episodes, but I noticed a reduction in his presence later on.

In conclusion, The Jim Gaffigan Show is a series that could have done decently on a prime time network, but is equally well suited for TV Land. The series has already been renewed for a second season, which is expected to debut on June 19. So fans don’t have too much longer to wait for their next fix. And yes, I now include myself in the aforementioned statement.

Jeremy Butler is a film school graduate of the International Academy of Design and Technology. He is been writing for Upcomingdiscs since 2012; however, movies have played a big part of his life for much longer. Favorite genres include horror, science fiction/fantasy, and comedy. Favorite movies are V for Vendetta, Boondocks Saints, Kiss Kiss Bang Bang, and The Godfather.
The Nice Guys Tuesday Round Up: May 24, 2016