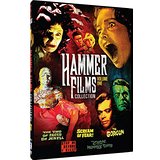 The mere mention of Hammer Studios brings to mind bloody terror to the legions of monster fans who grew up on a steady drive-in staple diet of the studio’s iconic monster movies. The studio picked up where Universal left off in the 1950’s and delivered a new run of the classic monsters we had been introduced to in black and white. Hammer brought these creatures to life in living … or is that living dead … color. Dracula, Frankenstein, The Werewolf, and The Mummy were all resurrected for a new cycle of films from the British studio. The place earned its often-used nickname of The House of Horror.

But Hammer wasn’t always known as a horror factory. The company actually began in the 1930’s, creating decidedly British versions of film noir. In the 1950’s and 60’s when the horror phase began, Hammer was also putting out other fare for a hungry public. These films often embraced some chilling elements but didn’t rely on monsters for many of the scares. The films were often even crime dramas or supernatural in nature. These films often were the training grounds for some of their staple talent over the years. In this collection Mill Creek has compiled some of these both classic monsters and psychological thrillers from the House of Horror.

“What an amusing face.”

This was actually the first of three Hammer films based on the Robert Louis Stevenson classic tale. Of course, the story has been told in one form or another hundreds of times. But this Hammer effort finds a clever new twist for the material. This time Dr. Jekyll is the rather evil-looking normal person who becomes a rather handsome and suave monster. It’s a nice addition of the old “skin deep” adage and makes a nice turn on a familiar story.

Dr. Jekyll (Massie) is obsessed with his scientific work and ignores his wife Kitty (Addams), who turns to his best friend Paul Allen, played by Hammer staple and horror icon Christopher Lee. She’s looking for some passion, and Allen is willing to provide it. The two hit the hot night spots, while Jekyll has taken a formula that has transformed him into the good-looking Edward Hyde. Hyde befriends Allen, and the two enjoy a night of debauchery. While Allen loses himself in the exotic dancer and snake charmer Maria (Marla), Hyde seduces his own wife without her knowing who he is. Murder is the result, and it’s addictive.

The film includes a cameo by Oliver Reed as a club bully. There’s also a rather interesting exotic dance where Maria ends up putting a boa constrictor’s head in her mouth. The snake ends up as one of Hyde’s murder weapons. The film ends with a rather nice twist I wouldn’t dare reveal here. This is an uncut version. A few minutes were originally censored when the film first appeared in the United States.

The film was originally called A Taste Of Fear and was the first of many Hammer attempts to cash in on Hitchcock’s Psycho. It became almost a sub-genre over at Hammer with such films as Maniac, Hysteria, and Nightmare. It was the first film at Hammer to be produced by the legendary Jimmy Sangster, who also wrote the script. It also featured Susan Strasburg in the starring role. She was, of course, daughter to the famous Lee Strasburg.

It all begins with the discovery of a young woman’s body floating in the lake and being recovered by police. We learn it was the once maid and childhood friend of Penny Appleby (Strasburg). She has been living in Italy for 10 years since her mother had died. Now her father has written for her to return home. When she arrives, the wheelchair-bound Penny finds only her stepmother and close family friend Dr. Gerrard, played by Christopher Lee. Soon she begins to see evidence that her father isn’t really out of the country on business. It looks like he has been murdered, and she doesn’t know by whom or why. Obviously, there is some kind of a conspiracy to crack.

The ending is another rather tangle of twists that you might not see coming completely. Director Seth Holt does a good job of presenting enough options here that it’s not going to be easy to pick out the truth.

“Overshadowing the village of Vandorf stands the castle Borski. From the turn of the century a monster from an ancient age of history came to live here. No living thing survived, and the specter of death is waiting for its next victim.”

A young man is accused of killing his pregnant fiancée, but the law is hiding a deep secret that no one really wants to talk about. Peter Cushing plays Dr. Namaroff, who knows what is killing people. Their bodies are turned to stone, something he has been cooperating with the law to cover up. The culprit is a gorgon, a sister to the Greek legend Medusa. Her name is Megaera, and she has the same powers. She possesses the body of an otherwise beautiful girl. Perhaps that is why Namaroff is trying to protect the secret. Christopher Lee is Professor Karl Meister, who is trying to uncover the truth.

The film stars British femme fatale Barbara Shelley as Carla Hoffman, with whom the Cushing character is in love. While she is possessed by the creature, she does not play the gorgon when it shows its ugly face. The makeup here is the weak link of a pretty good Hammer horror. The rubber snakes and caked-on skin look rather silly even for the time. Hammer legend Terrance Fisher directed the movie and has often claimed it to be his favorite.

“After a depressed fracture on the skull, cerebral contusions, and four weeks unconscious and six weeks on his back, it isn’t just physical injuries. The man’s emotionally unstable. His nerve is gone. There are gaps in his memory. He’s not like you or me. These racing boys are tough.”

Alan Colby (Lewis) is the said race driver. He’s been on top of the racing world complete with championships and endorsements for major companies. Now he’s just married his beautiful French bride Denise (Cilento), and they are on their way to the south of France for their honeymoon when they are in a bad automobile accident. It’s a year later before the couple is finally ready to try that honeymoon again. Colby appears to have lost his nerve. Worse, he is beginning to have violent urges toward his wife and is afraid he’s going to kill her. At the resort in France they happen to meet vacationing psychiatrist Dr. Prade (Dauphin) who takes an interest in Colby’s case. But is it Colby he’s interested in, or his wife?

This is actually a splendid thriller that I hadn’t even heard of before. It’s based on the novel The Full Treatment by Ronald Scott Thorn who also helped to adapt it for the film. The result is a wonderful study in mental illness and the doctor who has ulterior motives in trying to cure the victim. It has a deliciously Hitchcock-style ending. Jane Cilento is so charming as the new wife that she takes you completely by surprise in the film’s climax. All of the performers are first-rate here. It’s a beautiful little gem that you’ll want to see.

This was the second Mummy film to be made by Hammer. The first remains a true classic. This effort has been a little lost to time. It wasn’t a part of the old videotape collection released by Universal in the 80’s and has been a bit of a rarity over the years. It might be that it doesn’t star any of the Hammer staples, and it doesn’t really have the atmosphere that is so much a part of the Hammer legacy. There are two large scenes of exposition, so that more of the story is really told rather than shown. Michael Carreras wrote and directed the film, but it’s not one of his better efforts.

Alexander King (Clark) has financed an Egyptian archeological expedition that uncovers the tomb of the mythic pharaoh Ra. He’s a bit of a shuckster and showman, so he’s not content with selling the find to a museum. Instead he decides to tour the find in spite of the warnings of curses he’s hearing from both his team and their guide Hasmi Bey (Pastell). The character is an obvious nod to the Boris Karloff character from the Universal original film. What follows is the typical Mummy picking off those who have disturbed the tomb. Yes, there’s a twist with one of the characters that adds a bit of a clever turn, but it really only provides the film with ten minutes in the climax. There’s a lot of folks getting their hands chopped off. Otherwise, this is not a very gory or graphic film.

This is certainly a collection of Hammer’s B collection. Still there are gems and moments to be found here. There are even more than a few chills to go along with the package. “I’ve warned you the best I can.”

Gino Sassani is a member of the Southeastern Film Critic's Association (SEFCA). He is a film and television critic based in Tampa, Florida. He's also the Senior Editor here at Upcomingdiscs. Gino started reviewing films in the early 1990's as a segment of his local television show Focus. He's an award-winning recording artist for Omega Records. Gino is currently working on his 8th album Merchants & Mercenaries. Gino took over Upcomingdiscs Dec 1, 2008. He works out of a home theater he calls The Reel World. Favorite films: The Godfather, The Godfather Part II, The Body Snatcher (Val Lewton film with Karloff and Lugosi, not the pod people film), Unforgiven, Gladiator, The Lion King, Jaws, Son Of Frankenstein, The Good, The Bad And The Ugly, and Monsters, Inc.
Teenage Mutant Ninja Turtles: Out of the Shadows Game of Thrones: The Complete Third Season — Limited Edition Steelbook (Blu-ray)