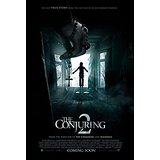 Since The Conjuring was released back in 2013, I can’t help but love what James Wan brought to the film; it’s that perfect film to put on during a stormy night.  Whether you are a believer in the paranormal or not, the life story of Ed and Lorraine Warren is interesting I’d imagine for skeptics, and for us believers, well, their day-to-day life seems downright terrifying.  Hearing how The Conjuring was going to be James Wan’s last horror film (after all he went on to do Furious 7) this seemed criminal to me, because he seemed like the one working director who had seemed to master the craft of creating a horror film.  Now Wan has come back to tell the next terrifying tale from the Warren’s case files with The Conjuring 2, and in the process has I believe has left his mark on the horror genre with perhaps the best haunted house film to date.

For fans of the first film, you may remember that it ended with Ed (Patrick Wilson) and Lorraine (Vera Farmiga) getting a call to investigate the Amityville house. This is where the new film picks up as the Warrens with other investigators are investigating the home to see if there was something paranormal inside. (For those unfamiliar with the Amityville story, I highly recommend spending some time on YouTube and checking out some of the documentaries about not just the mass murder that took place but also about the Lutz family that moved in after.) During the investigation Lorraine has an encounter with an evil entity that delivers an ominous warning to her.  Following this investigation, the Warrens become worldwide celebrities as experts in the field of paranormal investigation. It’s with this attention that accusations are made against them for being frauds.

The film moves along to 1977 and to London where a single mother, Peggy Hodgson (Frances O’ Connor) is raising her four children. The youngest daughter Janet (Madison Wolfe) seems to be the target of most of the paranormal attacks that range from everything from being teleported to eventually being possessed by an evil spirit.  I want to take a moment and say that Wolfe is one of the key fixtures at making this film work; her vulnerability that can quickly shift to being a possessed hellion is impressive to say the least.  But it’s the vulnerability that Wan is able to pull from all his actors in this film that makes it so believable, and once you can believe what these characters are experiencing, it makes it all the easier to be terrified right along with them.

When the church eventually approaches the Warrens about investigating the case and helping the Hodgson family, we start to see how the film offers up two directions the viewer can choose to take the film.  The priest suggests the Warrens go simply as advisors and to see things for themselves, only to report back if indeed this case is a hoax or if this is legitimately a family in need.  At this point with the Amityville house becoming a public disaster for the church and the Warrens, the thought of any more negative publicity is just not wanted or needed.  Personally as a viewer I’m a firm believer in the afterlife, but the lack of evidence does make things difficult at times, and from a skeptic’s point of view it’s very easy to see how one could simply point a finger at the Warrens and call them frauds.  So when we see all the effort being made to capture evidence at the Hodgson residence, we can understand their urgency to want things on tape or on film.

Wilson and Farmiga have really made these roles their own; not only do I buy into them as being a couple, but I buy into the thought that these two have combatted evil side by side for years.  When we see them attempting to help the Hodgson family, we see their struggle to believe and their compassion to want to help, and it’s this humanity that is brought to the film that sinks its teeth into the viewer and allows for the suspension of belief when necessary.

The investigation would go on to be known as The Enfield Poltergeist, due to it taking place in the suburb of Enfield, London.  This was one of the most widely documented cases of the paranormal to the point even the BBC was doing news reports about the family and the haunting.  With all the footage collected, it seems Wan and his design crew were able to recreate sets and costumes with a lot of detailed accuracy.  Factor in the actual recordings that were captured of the entity speaking through Janet, well, there are some truly haunting moments for sure.

One of my favorite little bits involved a character brought to life called The Crooked Man; this is one of those images that stuck with me long after the film ended, and I can appreciate how this would scare any small children, and he’s simply only a footnote in this film.  It’s also the numerous practical effects that we see on screen that allow the terror of the film to feel so close to home, simply by having a TV controller move from one spot to the next, or a chair move.  It is simple camera work that is beautifully executed and is simply so effective.  I counted at least six quality jump scares, when I’m impressed if a film can pull off two; by this I mean to say that YES, this film is actually scary.

The unseen hero of the film is film composer Joseph Bishara, who returns to execute another beautiful creepy score. While it may not have a piece that is as memorable as the Halloween theme, it’s easily one of the more effective horror scores that have been put together in the past few years.

One thing that did bother me about the film is in its final act; the resolution was simply too easy, and to a certain degree I’d dare to even say it was a tad lazy. I understand wanting to follow the true story, and I understand how Hollywood wants an ending, but for a film like this, perhaps being a little ambiguous isn’t such a bad thing.  Don’t get me wrong, the final act still has one of my favorite camera shots of the film as we see a wide-overhead shot of characters running around the house; it’s cool, and it’s effective, but was it needed?  Perhaps in following viewings my feelings about this will change, or perhaps in a film commentary I can hear what went into the decisions concerning the ending, but till then I’ll have to remain slightly let down.

Despite the ease with which the ending came, I still love this movie and already am looking forward to seeing in again in the upcoming week.  This is how you make a sequel; this is how you make a great film.  It clocks in at a 134 minutes, but I still could have watched more.  I want this franchise to continue on; there are still many creepy tales yet to be told, and if every few years we can get another tale from the Warren’s case files, I’ll be good with that so long as Wan is helming and Wilson and Farmiga continue to reprise their roles.  Yeah, I might nitpick the ending, but truth be told, I haven’t seen a film cause me to jump like this since I was a kid.  This is the perfect Halloween film about the ghostly figures that go bump in the night.  See this alone or with friends; see it with a girlfriend who will likely be clutching your arm and burying her face into your shoulder to hide; either way, just see this film.  This is the throwback horror film that reminds fans how great a film experience can be with the right material and passion behind a project. You don’t need excessive gore or CGI monsters, and simply a story with enough scares and heart can go a long way to making a trip to the theater great again.

Brent Lorentson is a horror writer and film critic based out of Tampa, Florida. With a BA in Digital Film, he co-wrote and co-directed Scavenger Hunt. His short stories have appeared in various horror anthologies. In 2019 his short script Fertile Blood will be a part of the anthology horror film Slumber Party. He is currently working on his first novel A Dark and Secret Place set to be released in late 2019. Favorite Films: Taxi Driver, Fight Club, I Saw the Devil, The Wild Bunch, Dawn of the Dead, A Clockwork Orange, Pulp Fiction, Heathers, The Monster Squad, and High Fidelity.
The Confirmation (Blu-ray) Warcraft