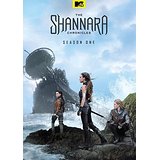 With the success of the Teen Wolf series, it comes as no surprise that MTV would not just capitalize on creating another genre series to the channel, but also tap into the success of a young adult book series. It seems like a no-brainer. Tackling the book series of The Shannara Chronicles was a big risk for the network, with a large cast and a lot of effects, but most importantly, this may be the most dramatic shift the network has had in appealing to a demographic.  Really, let’s take a moment and realize how the network that once appealed to the audience that praised the exploits of The Jersey Shore is now attempting to appeal to a geekier and, let’s face it, a smarter audience. It’s a true sign of the times and how things have changed, and it’s a change for the better.

The Shannara Chronicles takes place on Earth, many years after the planet suffered through some cataclysmic event.  The world, or at least as far as I can tell, America, is now known as The Four Lands.  When the series opens up we are introduced to Amberle (Poppy Drayton), who is an Elf princess, but has been secretly in training for a contest that will determine an elite group called The Chosen, who are basically the protectors of her people.  As it would turn out, she does succeed, but it’s at a cost.  Her people worship a magical tree called the Elcrys that gives power and protects the people, unfortunately the tree is dying, and Amberle may be its only hope for survival.

There is also Wil (Austin Butler), a half man/ half elf that has set off on a journey himself to uncover the truth behind these magical blue elf stones.  Early on in his journey he crosses paths with Eretria (Ivana Baquero), who is a Rover (a human thief) who of course has a suspicious agenda.  It takes some time, but in time Amberle, Wil, and Eretria come together on a quest to find a seed and have it replanted so that a new Elcrys can form.

It’s obvious that the story follows the same bullet points as The Lord of the Rings; instead of a ring, it’s a seed.  While watching this you can almost do story sync with LOTR to figure out what could possibly happen next. While I wouldn’t go so far as to say this is a bad thing, it is still unfortunate that the story seems not to offer anything that we haven’t seen before.

What does work well in the show’s favor is the casting of the core three leads.  All three are charming and give me hope that the longer they inhabit these roles that we can get some stronger performances out of them.  I should warn you, though, be careful about what characters you grow attached to.  Following in suit with Game of Thrones, this is a show that isn’t afraid of killing off characters, but there is a caveat; it seems that it’s not too difficult to resurrect certain characters either.  I have a problem with shows that can so easily dispense of characters and easily have them return to the story; it takes away the impact of their loss once you know that with a couple magic spells all can be changed.

Another issue I find with the show is, we’re supposed to believe in elves and trolls and an assortment of monsters, but they just do little to explain their existence in this world.  I’m guessing these creatures came to be as mutations or hybrids, but considering the story takes place after the fall of Earth as we know it, just a little explanation would be nice; after all, they speak of these ancient people and traditions, but when you see certain landmarks or at one point a character flipping through a yearbook, you realize the disaster on Earth couldn’t have happened “too” long ago. Despite many of the backgrounds and many characters being CGI creations, there are solid production values that easily elevate this past your typical sci-fi television shows.

While the show is far from perfect, with the creators/producers behind Smallville and Jon Favreau putting his name on it, I believe the show will simply only go on to improve as the character dynamics continue to develop and our view of the world only goes on to expand.  There is plenty of opportunity for the show to blossom into something special for its target teenage demographic, but I wouldn’t get too excited yet.  The potential is there, though, and this is a show that could become the Game of Thrones for teens, or just as easily slip into obscurity; only time will tell.

Brent Lorentson is a horror writer and film critic based out of Tampa, Florida. With a BA in Digital Film, he co-wrote and co-directed Scavenger Hunt. His short stories have appeared in various horror anthologies. In 2019 his short script Fertile Blood will be a part of the anthology horror film Slumber Party. He is currently working on his first novel A Dark and Secret Place set to be released in late 2019. Favorite Films: Taxi Driver, Fight Club, I Saw the Devil, The Wild Bunch, Dawn of the Dead, A Clockwork Orange, Pulp Fiction, Heathers, The Monster Squad, and High Fidelity.
Maude: Season 5 Rizzoli & Isles: Season 6