Posted in: The Reel World by Archive Authors on July 6th, 2016 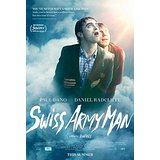 If a film is highly original, that is usually a good thing. If it completely defies logic, that might be good or bad, depending. If it defies common sense and intelligence, that would be a bad thing. Swiss Army Man does all of those things. It is tantalizing with possibilities that are explored, but frustrating in execution. It is rude and unpleasant, and not in a good way. Some people will respond to its ridiculous rudeness in a positive way, like the way that most children laugh when someone farts. That is not the real problem with this movie. The real problem is a lack of inherent logic to much of what occurs. One could say that it is a result of the obvious insanity of the main character of the movie, Hank (Paul Dano). I would suggest that the filmmakers might not have fully understood what they were trying to convey. I think they were caught up in the execution and got lost along the way. The main themes of the movie are alienation, loneliness, and insanity, but our framework for judging these characters is so skewed as to make it impossible to interpret what is actually happening. Some parts are clearly psychotic delusions, but other parts just seem silly tangents by the filmmakers that seem stylistically playful for no effect whatsoever. I can say I like some of the more bizarre moments from time to time, but the effect of the film as a whole is repulsive.

I don’t disagree with the point that films like these should be encouraged, because we are at a point in modern culture that we are being smothered under tons of pablum. Swiss Army Man stands out because it is reactionary to what is going on in the modern culture. It is gross, chaotic, and strange. I welcome things that are offbeat. But in this case, I was turned off. Some of it is genuinely funny in a real way as well as being bizarre, but much of the movie drifts off into confusion. I doubt I am going to ruin anything by revealing the plot, but if I did, it wouldn’t make any sense. It starts with Hank getting ready to hang himself in the mouth of a cave on a deserted beach. Just before he kicks the bucket, he sees another human being washed up on the beach. It is Manny the corpse (Daniel Radcliff of Harry Potter fame). Manny becomes someone with whom Hank develops a very complex relationship. Often Manny demonstrates numerous useful talents, mostly revolving around his flatulence. Slowly Manny starts to show signs of life and even intelligence. Then we are not sure what is happening. Hank is also obsessed with a woman he saw on a bus once, Sarah (Mary Elizabeth Winstead). And are we actually on a deserted island, or just down the hill from Sarah’s house?

The film is directed by Daniels, actually Daniel Kwan and Daniel Scheinert, who have directed mostly music videos, most notably “Turn Down The What” by DJ Snake and Lil’ Jon. It is obvious that this movie is a love-it-or-hate-it affair. I will give it a low rating because most people will hate it. If you like sick, twisted, warped, demented, and unusual, I understand. You will love Swiss Army Man. I like much of the movie, but as a whole it is a mess.