Posted in: No Huddle by Jeremy Butler on October 4th, 2016 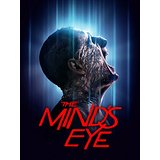 Imagine being able to move things with your mind, no matter the size. To suddenly be able to send a car or a person flying through the air merely through the power of your thoughts. I’m sure we have all thought about having such extraordinary power. For Zach Connors, it is a reality; however, the power is more curse than a gift. The Mind’s Eye presents an engaging and intriguing look into what it would be like to possess this psychic ability. From the inability to control the power, to the isolation, to the envy and lust to obtain the ability for themselves, the movie hits on several key aspect and all the while never loses steam as it heads towards the final battle, which in itself is quite the meeting of the minds. Pun intended.

Zach Connors (Graham Skipper) is a drifter with the ability to move things with his mind. It is an ability that he cannot fully control and has forced him to leave behind everyone he ever loved, from his father to the love of his life, Rachel Meadows (Lauren Ashley Carter). Following a confrontation with police which results in him losing control and injuring the officers, he is arrested and approached by the mysterious Dr. Slovak (John Speredakos). Claiming to be an expert in the field of psychokinesis and offering to help Zach, the stranger offers him a place at his institute in order to help him gain control of his power.  Zach is hesitant until the doctor mentions Rachel, who apparently is undergoing treatment at the institute.

Months go by and Zach hasn’t been allowed to see Rachel or leave the facility. Poked and prodded, it doesn’t take long for Zach to put together the real purpose of the institute is not to help him gain control but to learn how to replicate his power. Launching a daring escape, Zach and Rachel find themselves on the run from Slovak, who won’t rest until he possesses their power.

So the quality is low-budget, but I must say that The Mind’s Eye proves that you don’t need a box-office budget to tell a good story. Not to mention when you get a look at the realistic gore, you won’t think that the production is that low-budget. That is definitely one of the most exceptional aspects of the movie and why it earns a place on the 31 Nights of Terror. The bloody battles, especially the one in a certain residence are liable to have the audience cringing.

This was an engaging story for me, as it felt very relatable, especially given Slovak’s desire to claim the power of psychokinesis for himself. I had to no trouble imagining that the methodology for that objective would develop in a similar pattern if this situation had been real: pose as a friend in order to gain the person’s trust; offer something that they desire until you have time in a secure place and manipulate them into complying with your request. On the other side of the coin, I guarantee that the rebellion and escape would happen just like it did in the movie, because exactly how are you going to stop a psychic who really wants to leave.

The crown jewel for the movie is the final battle, which like I said was quite the meeting of minds. It is a particular challenge to convey a bloody onslaught when the two gladiators are using their minds. This is where the importance of good acting plays an integral role; fortunately the film cast actors with the talent to convey action and concentration through their expression. It’s a miracle they didn’t burst any blood vessels.

Jeremy Butler is a film school graduate of the International Academy of Design and Technology. He is been writing for Upcomingdiscs since 2012; however, movies have played a big part of his life for much longer. Favorite genres include horror, science fiction/fantasy, and comedy. Favorite movies are V for Vendetta, Boondocks Saints, Kiss Kiss Bang Bang, and The Godfather.
The Tonight Show Starring Johnny Carson: The Vault Series – Archive Classics Tuesday Round Up: October 4, 2016