Who Gets the Dog? 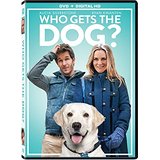 First Impressions: a poor man’s Marley and Me. Final Impressions: a poor man’s Marley and Me. So from beginning to end my impression of the film did not change, but that doesn’t necessarily have to be a bad thing. In fact, that is exactly the case for Who Gets the Dog, a heartwarming tale about a poor dog caught in the middle of a divorce of a couple that see him as their child rather than property. Ryan Kwanten and Alicia Silverstone headline the cast of this story but without question the real star is Wesley, our beloved pooch. A wholesome experience can serve as a date movie or film for the whole clan.

Olive Greene and Clay Lonnergan are polar opposites; she is neat, organized with an established career while Clay is spontaneous, fun loving, and waiting for the opportunity to be called up from his minor league hockey team to the majors. Their marriage was an unlikely one to start with and takes no one by surprise when they decide split. For the most part, they handled everything amicably, dividing their shared property fairly and to both their satisfaction. That is until they realize that they both want custody of Wesley, their beloved Labrador; that’s when the gloves come off.

Eventually they find themselves before a judge, who declares that they will share custody of the pet for 60 days and then the final ruling will be determine. During the allotted time, Westley begins to act out in response to the turmoil of his human parents, who find themselves gravitating towards one another over their share connection with the dog. Can man’s best friend put this man and woman back together?

Who Gets the Dog is a good wholesome film that can be enjoyed by the whole family. It stays on point from the very beginning, dropping right the point where the leads break the news to Wesley that they are splitting up. The story does a god job of staying on message and not deviating from the established storyline.  There are a couple of subplots such as the addition of Koji, a young man that Clay is mentoring and Owen, a potential suitor for Olive but they both feed into the main storyline about the main threesome (Clay, Olive, and Wesley).

The story stays lighthearted which is both a good and bad thing. In the positive, it helped to keep things playful and keep me engaged. In the negative, it would some of the authenticity and relatability of the story slightly lacking. For example, the initial argument over who gets Wesley, both Kwanten and Silverstone performances felt phoned-in and cheesy, especially when Silverstone tried to eject Kwanten from the house. Plus it took quite a bit of time before the chemistry became evident for the two leads. During argument they were not compatible, but fortunately towards the middle during their alone time with the dog and they were talking about the other, it was more genuine. Side note, the support system (i.e. the best friends) for both characters were a big source of the comedy. Every off-hand comment from Matty Ryan was a gem, especially during the doggy tug-a-war scene (look for it, I promise you’ll be rolling).

Who Gets the Dog was a joy to watch and I recommended it as a date movie or an experience to share with the whole family. The combination of Matty Ryan’s off-hand comments, the slight tugs on the heartstrings, and adorableness of Wesley make it a worthwhile experience.

Jeremy Butler is a film school graduate of the International Academy of Design and Technology. He is been writing for Upcomingdiscs since 2012; however, movies have played a big part of his life for much longer. Favorite genres include horror, science fiction/fantasy, and comedy. Favorite movies are V for Vendetta, Boondocks Saints, Kiss Kiss Bang Bang, and The Godfather.
Tuesday Round Up: October 25, 2016 “31 Nights Of Terror” Contest: Win Abbott and Costello Meet Frankenstein On Blu-ray