Posted in: The Reel World by Gino Sassani on November 21st, 2016 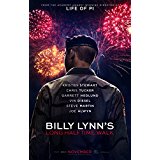 In the summer of 1974 The Paper Lace released a song called Billy Don’t Be A Hero. It has the distinction of being the first and perhaps only hit record to top the charts twice in a year by different bands. The second release in 1974 was by Bo Donaldson and the Heywoods. For some reason the song was playing over in my head as I watched Billy Lynn’s Long Halftime Walk. I’m not sure if it was because the title characters share the same name or because both deal with war. The song was written about the Civil War but was thought by most to be about Vietnam, likely because of the release dates. Vietnam was an unpopular war, and the same can be said for the war in Iraq. The similarities continue. The song ended up fading as summer candy pop music, and the same is likely to be the fate of this film.

Billy Lynn (Alwyn) became an unexpected hero during a firefight in Iraq. The enemy had shot and was attempting to take away his commanding officer. He ended up killing an enemy combatant in hand-to-hand combat. Washington, sensing a growing impatience with the war among the American people, decides to parade Lynn and his company on a two-week goodwill tour. The final stop was a half-time show at a Cowboys game with Destiny’s Child. During that few hours Lynn has flashbacks of not only that moment in the war but his family. His sister, played horribly by Kristen Stewart, is trying to get him to go AWOL and to a psychiatrist so that they can make a point about the war. Lynn’s torn between his duty and his sister. Throw in a fling with a Cowboys cheerleader just for giggles, and you have the makings of a rather disappointing film.

Ang Lee had the opportunity to do something profound here. I was greatly disappointed that he squandered the chance on a very disjointed script and an inability to commit to his message. Instead Lee decided to put his focus on the cinematic breakthrough of filming the movie at 126 frames per second instead of the standard 24. The idea was to create a super-heightened experience for moviegoers. Unfortunately, he forgot to bring along a good movie to make that experience actually touch the viewer. The focus is made that much more tragic by the fact that few theaters in the country are even capable of projecting a film at that frame rate. So very few folks will ever see it that way. As of this moment, the film is only going to be exhibited in the advanced frame rate in select New York City and L.A. theaters and even then only for the first week of the film’s engagement. So much was sacrificed for so few, and in the end the film won’t be remembered for whatever daring production tricks it might have pioneered but for just being a totally disjointed movie. While the frame rate might add realism, Lee took a quite fake and almost ridiculous reality that left this viewer empty and scratching his head.

Part of that insane reality has to do with the character of the team owner, played by Steve Martin. The character goes by another name, but it’s an obvious spoof of Jerry Jones. In fact the entire setting is a spoof. The team shares the colors and helmet design of Dallas Cowboys but is slightly altered with the letters of Texas between the star points. There’s a huge model of “the future of football stadiums” in the owner’s box that’s obviously pointed directly at the new stadium that has been Jerry’s monument to himself. The Jones-spoof tries to sell the squad that he should make the film while trying to buy off the soldiers for almost nothing. It’s a B story that only distracts from any serious message the film might have been trying to communicate. The only entertaining part of the film happen to be Chris Tucker as the Hollywood PR guy trying to get these guys a good deal. Lee should have spent less time trying to create a realistic cinema breakthrough and created a more serious and realistic story and setting. They use the real names for Destiny’s Child with prominent references to Beyonce without using any of the real performers. Why the heck not? I was waiting for some lengthy scenes from the war itself. I figured this must be where the need for the frame rate was derived. These scenes are too short to be anything but snippets. And the cheerleader fling doesn’t make any sense at all. Most important is the fact that none of these story threads ever goes anywhere. The same will likely be said for Billy Lynn’s Long Halftime Walk.

At any frame rate, I’m afraid “There’s nothing to see here.”

Gino Sassani is a member of the Southeastern Film Critic's Association (SEFCA). He is a film and television critic based in Tampa, Florida. He's also the Senior Editor here at Upcomingdiscs. Gino started reviewing films in the early 1990's as a segment of his local television show Focus. He's an award-winning recording artist for Omega Records. Gino is currently working on his 8th album Merchants & Mercenaries. Gino took over Upcomingdiscs Dec 1, 2008. He works out of a home theater he calls The Reel World. Favorite films: The Godfather, The Godfather Part II, The Body Snatcher (Val Lewton film with Karloff and Lugosi, not the pod people film), Unforgiven, Gladiator, The Lion King, Jaws, Son Of Frankenstein, The Good, The Bad And The Ugly, and Monsters, Inc.
Fantastic Beasts And Where To Find Them Tuesday Round Up: November 22, 2016