Posted in: No Huddle by Dan Holland on February 8th, 2017 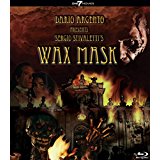 If you have any love for Italian horror films, then you know the names Dario Argento and Lucio Fulci are the ones that cause the most excitement. Both directors have made a name for themselves in horror cinema, each providing their own authorship within their own interests. Much like debate concerning The Beatles or The Stones, cinephiles typically side with one over the other. Yes, Argento has conjured dreamlike, character-driven horror that has haunted our minds over the decades (Suspiria, Phenomena), but the late Lucio Fulci has a seemingly innate ability to create landscapes of terror that consistently push the envelope of realistic gore (Zombi, The Beyond). While I do tend to favor Fulci, I am well aware of both of their contributions and influence to horror cinema as a whole. Even though they have notable differences, The Wax Mask offers a collaboration between the two greats prior to Fulci’s death in 1996.

The story, written by both Argento and Fulci, is an adaptation of Gaston Leroux’s “The Waxwork Museum.” The plot involves a mysterious wax museum in 1922 Italy, whose curator has an interesting fetish for the macabre: he only creates scenes of famous murders. Whether it is the slaying of the gorgon Medusa, the mysterious case of Jack the Ripper, or a more contemporary double murder, he creates the scenes for his museum. However, as the film progresses, a reporter and the museum’s newest employee discover the curator’s unorthodox methods of creating his sculptures, as well as the dark history surrounding the curator’s family.

First comes the good. The film was indeed written by the powerful duo, but it was originally helmed by Fulci until his death. At that point, special effects maestro Sergio Stivaletti stepped in to direct (Argento was tied to a different project). With that said, Stivaletti certainly lent his own expertise to the film, but you can certainly see where he yields to inspiration consistently. Whether it be Argento’s hard shadows and lighting techniques, or Fulci’s creatively gory sequences, The Wax Mask certainly looks like a horror film from one of the greats. Considering that this would be Stivaletti’s directorial debut, it would make sense for him to borrow techniques from the minds that inspired this story. However, that leads to the question: how much is too much? If you are an avid consumer of giallo films, you might begin to recognize that it is not just technique being borrowed, but imagery as well.

The argument could be made that he wanted to appreciate his predecessors through nods and winks to their older films, but the more you see it, the more it just doesn’t feel right. For example, there is a scene that features broken mirrors throughout a vacant house, allegedly broken by the disfigured killer. I’ve seen enough of Argento to know that mirrors are some of his favorite motifs to work with. Perhaps Argento also took part in storyboarding, enabling mimicry to occur, but the movement and pacing amongst the mirrors of the sequence in question looks just a little too similar to the climax of Argento’s Phenomena (that also involved mirrors). It doesn’t stop there, either. Many of the death scenes are direct nods to the victims in some of Fulci’s most famous works. While that is not necessarily a problem, you start to wonder about what could have been.

Would the film have been better had Fulci lived long enough to grace us with just one more gory masterpiece?  I would argue yes. It is one thing to write a film, and it is a completely separate challenge to physically produce it. While the film definitely had very complex layers within the story, the film just didn’t seem to satisfy. Something was missing. I believe that missing ingredient was experience. A first-timer was handed a golden opportunity, and he did his best to get it to take off. As I said before, there is a lot to like about this film if you know what to look for. Aside from that, the pacing is slow, the sex scenes become frequent and tedious, the story becomes less cohesive as the film progresses, and other minor things like that. These are all acceptable mistakes for a first time director, but Stivaletti has the unfortunate role of operating under the guise of greatness. Simply put, it looks like an Argento/Fulci film, but it is an empty husk ready to collapse.

If you are a huge fan of Italian horror and giallos, of course this is a must-have for your collection. But if you are expecting to be wowed by Fulci’s last creative work, it is a little disappointing. My personal favorites among Fulci’s work are predominately in the early 80’s, and the more I watch, the more I understand that’s where they will probably remain. If you do plan on watching this film, just keep your mind open to the energy and camerawork that was put into creating each image you see, and you will appreciate what is truly important about the film.

Tuesday Round Up: February 7, 2017 Frankenstein: The Real Story/The Real Wolfman