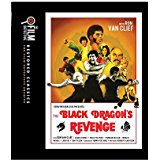 Exploitation film has reached a point where there are just too many subgenres to count, or to care about for that matter. This film combines three of the subgenres into one incoherent amalgamation of boredom: Blaxploitation, Kung Fu flicks, and “Brucesploitation.” While the two former concepts should be familiar outside of the realm of cinephilia, Brucesploitation may be a little more difficult to grasp. Basically, after the death of Bruce Lee, filmmakers began to capitalize on Lee’s image posthumously, by using barely passable lookalikes such as Bruce Le or Bruce Li as lead martial artists. In the case of The Black Dragon’s Revenge, only Bruce Lee’s name was used, but he was an important concept to the ideas given by the plot of the film. However, with the three subgenres combined, a paper-thin plot, and abnormally slow pacing, The Black Dragon’s Revenge manages to transcend the concept of “leaving much to be desired.”

The film’s protagonist, Ron Van Clief, or The Black Dragon, plays himself in a plot that suggests a quasi-reality in which Bruce Lee had written a secret martial arts style before he was killed. It is up to The Black Dragon to find this manuscript and discover the reason that Bruce Lee was killed. That is what the film’s box and other reviews suggest to be the story’s plot. However, when watching, it is incredibly easy to get lost, considering each character has an insanely limited agency. As the film progresses, you are introduced to more characters that don’t have a perceived logical contribution to the advancement of the story, yet they stick around, and you are expected to understand why. Unfortunately, the poorly written plot is the first step towards a very unbalanced ratio concerning bad to good.

Ron Van Clief does not aid the film in any way. Van Clief was indeed a forced to be reckoned with in the martial arts, earning a 10th degree black belt in karate in the mid 1970s. In fact, Bruce Lee himself bestowed the nickname The Black Dragon to Van Clief, which really speaks to his prestige. However, two very critical things work directly against Van Clief in this film: he is a terrible actor, and karate is not really a fun martial art to watch. Both of those things get a considerably generous amount of screen time. Van Clief’s facial expressions and vocal delivery, coupled with overdubbing and missed cues, create the most disjointed martial arts film I have seen to date. And while The Black Dragon certainly is very good at Karate, his onscreen demonstrations are largely defensive and stagnant, unlike the fast-paced and aggressive kung fu that inspired it. Essentially, Van Clief’s role in the film is to drag the audience through a terribly slow plot, all the while striking impressive poses that may or may not block opponents’ attacks.

Aside from some interesting weaponry and two well-choreographed fights, this is a tough one to recommend, even for exploitation film lovers. The Blu-ray quality doesn’t really add too much, especially given that many scenes in the widescreen transfer distort the actors’ faces and limbs. Yes, everyone has their own tastes, but I take pride in my ability to enjoy terrible movies, and I just couldn’t do it in this case. Perhaps this is due to the fact that I didn’t find it all too exploitive. It was only Blaxploitation because Van Clief had the afro, the sideburns, and the swanky clothing. It was only an exploitive kung fu flick because there were a bunch of tropes such as a dojo master, one-versus-many fight scenes, and training montages. It was only Brucesploitation because his name was mentioned over and over again in the plot, and the film’s original title was The Black Dragon Revenges the Death of Bruce Lee. It has the look of an exploitation film; it just doesn’t really exploit much.

If you want to see an exploitation film that was created in the same spirit as this one (a kung fu Blaxploitation film), I would suggest Bamboo Gods and Iron Men. The only reason I could give to enjoy this film is Ron Van Clief’s physical ability and posture. Or, perhaps, you want to get lost in the waste land of hidden villain motivations and The Black Dragon’s fearsome defense postures. In any case, the only thing that this film exploited was the time it took to watch it.