Posted in: The Reel World by Gino Sassani on March 2nd, 2017 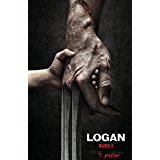 “I always know who you are. It’s just that sometimes I don’t recognize you.”

Logan is perhaps one of the most interesting, endearing and popular characters in the Marvel universe. Wolverine has the distinction of having been created by someone other than Stan Lee and Jack Kirby. While they invented the X-Men team from which the adamantium-clawed warrior was born, he was actually created by the team of Len Wein and John Romita, Sr. in the mid 1970’s. Since that time the character has taken on a life of his own, a life that is as much owed to actor Hugh Jackman as anyone else. The funny thing is that Jackman is really nothing at all like the comic book character, who was actually quite short. But it’s Jackman who has come to personify the wirily Cannuck. He’s appeared, if only briefly, in each of the X-Men films except for one and two less-than-stellar Wolverine films. It all comes to a rather fitting close with one of the best Marvel-character films to date. Logan is pure comic book film noir and an emotional ride from start to finish.

This is the first of the X-Men films to take place entirely in the future. It’s 2029, and there are very few mutants left in the world. Charles Xavier (Stewart) is suffering from Alzheimer’s disease and is being cared for by Logan (Jackman). Xavier must be drugged to keep his failing mind from creating destructive shock waves around him. But Logan is no longer the powerful mutant he was for so many years. His healing power doesn’t completely work, and now he’s covered in scars and wounds that haven’t completely healed. The day of the mutant appears to be coming to a close, and both Logan and Xavier look like the last struggling remnants of a dying race. But that’s not completely true. Logan is confronted by a woman who is running from some bad guys. She has a young girl named Laura (Keen) who she wants Logan to escort to a set of coordinates where there are other young mutants. When they are attacked we discover that the girl is a mutant and nearly like Logan. She has two claws in her arms and one in her feet. Weapon X-23 came from the same program that created Wolverine. Now Logan must protect her from the army of soldiers who want to retrieve her. Unfortunately, he doesn’t feel like he has the energy or will for the task, particularly after he discovers the coordinates came from an X-Men comic book and are unlikely real. Charles understands even in his irrational state and presses Logan to save the girl.

That’s when Logan turns into a bit of a road film. Logan, Xavier, and Laura make for the coordinates with the bad guys hot on their trail. Of course it’s not good news for the people they encounter along the way, and the cost of this journey is high both in body count and the toll it is taking on the fading Wolverine. What they find is best left for the moviegoer to discover on their own.

This is the Wolverine film most of the fans have been waiting for. It is based somewhat on the Old Man Logan comic story arc, but don’t go expecting to see that story. This is more the spirit of that tale, and while the character of Logan is very much in keeping with that story, this goes in completely different directions. This is as much the story of Weapon X-23 from the comics as it is Old Man Logan. At first I was a little disappointed that the movie was so much about that particular story until I began to realize how much it brought out the heart of the failing Wolverine character. Young actress Dafne Keen doesn’t say very much for the entirety of the movie, and it’s not really even her character that provides the heart. It’s what she stands for in Logan’s eyes that makes this all work. It’s that internal struggle against the beast Logan has always considered himself to be and that inner need to do something good. Logan fights against his own better angels only to discover that he needed both his angels and demons to make his difference.

Both Hugh Jackman and Patrick Stewart deliver some of the best performances of their careers to this movie. The relationship between these characters makes the film, and the actors dig into every reservoir of chemistry they’ve ever had to bring us quickly into a world we never get to see set up. If ever there were Oscar-worthy performances in a comic book film, both of these thespians deserve the consideration it is unlikely they will receive. The film uses a few memories from previous films to help cement that bond, but honestly, it wasn’t necessary. The two play this father-and-son-like relationship out to it’s highly emotional end. And make no mistake, this is the end of the road for both characters. As much as I would like to see them play these characters for years, it just wouldn’t feel right for any of them to appear again.

You couldn’t script a better goodbye for both Logan and Xavier. But James Mangold managed to do just that. He worked with Jackman on the better of the two earlier films, and the two obviously developed some chemistry of their own. You get the idea that both of these men understand who this character is at his core. More than that, they’re fans themselves who have developed a bond with the character and the fans, and you can see it was important to both men to deliver something special. Ryan Reynolds wants very much to team Deadpool with Wolverine in an attempt to make up for the mess that was the Origins film. I understand why he’d want to do that, and for a long time I was hoping it would happen. Not anymore. Once you’ve seen Logan, you won’t want it anymore, either.

The film also sports a rather stunning world that none of the previous X-Men films managed to capture. This bleak future time and place is what I earlier referred to as comic book film noir. It’s the kind of atmosphere you almost expect to see in black & white, and recently Mangold has announced his intention to release a version in black & white. Unlike the recent Mad Max film which I felt lost something in its “Chrome” edition, Logan will look rather sweet in that format. Color doesn’t really play a part in this movie, while reds particularly had import in Mad Max. Here it’s the mood and atmosphere that matters, and I am eager to see a black & white version. The film is also a bit of a spaghetti western in the best traditions of Sergio Leone. Logan has a lot in common with Eastwood’s Man With No Name. He’s a reluctant hero who is pushed into battle by evil forces around him. Logan no longer wishes to be a hero. He’s drowned himself in booze and self pity. The last thing he sees in himself is a hero. That’s a lot of style and atmosphere for a comic book movie. Some will be disappointed at the bleakness and rather somber mood. This isn’t The Avengers. But this is an example to the folks at DC on how to do a dark and moody superhero film the right way. You’ll leave with some unexpected emotions, and it might even take you a while to decide how you really felt about the movie.

I love the character, and even more I love what Hugh Jackman has brought to him. It’s a real disappointment to me that Wolverine never got to team up with the other Marvel heroes. He had some wonderful adventures with Spider-Man in the comics and spent many years with the Avengers. I’ll regret never getting a “fastball special” or to see those interactions. But it’s too late for all of that now. Mangold and Jackman managed to bring out two very conflicting feelings. This movie will leave you wishing for more but glad it’s the end. “This is what life looks like.”

Gino Sassani is a member of the Southeastern Film Critic's Association (SEFCA). He is a film and television critic based in Tampa, Florida. He's also the Senior Editor here at Upcomingdiscs. Gino started reviewing films in the early 1990's as a segment of his local television show Focus. He's an award-winning recording artist for Omega Records. Gino is currently working on his 8th album Merchants & Mercenaries. Gino took over Upcomingdiscs Dec 1, 2008. He works out of a home theater he calls The Reel World. Favorite films: The Godfather, The Godfather Part II, The Body Snatcher (Val Lewton film with Karloff and Lugosi, not the pod people film), Unforgiven, Gladiator, The Lion King, Jaws, Son Of Frankenstein, The Good, The Bad And The Ugly, and Monsters, Inc.
Allied (UHD Blu-ray) (4K) Tuesday Round Up: March 7, 2017