When Calls The Heart: The Heart Of Faith 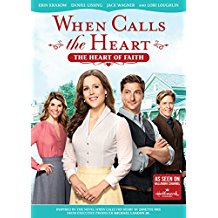 I am not the target audience for this Hallmark Channel series. Despite this fact, it was not hard to find something to like about When Calls the Heart: Heart of Faith. This Christmas special which takes place between the Season 3 finale and the impending Season 4 premiere tugs on the heartstrings and provides a festive feeling in the month of March. Odd, I know, but who says you can only have holiday cheer during the winter season? More than that, the special preaches the true meaning of Christmas as we watch a town come together to accomplish something not for themselves but for the betterment of the committee.

Picking up where the Season 3 finale left off, it’s Christmas time in Hope Valley (formerly Coal Valley) and Miss Elizabeth Thatcher (Erin Krakow) finds herself heading up the Christmas committee, including organizing the Christmas play. Determined to do a good job, she dives head first into her work, rallying everyone she can to assist with the preparation, as well as trying to teach her class the true meaning of Christmas by assigning roles in a very creative way. Meanwhile, the townspeople are working to build new homes for the settlers who apparently lost their homes as well as their families in the mine collapse that predated this special. Working day and night to complete the project before the holiday, Canadian Mountie Jack Thorton (Daniel Lissing) must overcome many obstacles, all the while serving in his official capacity as the town’s law enforcement officer.

Meanwhile, local café owner Abigail Stanton (Lori Loughlin) finds herself overwhelmed as she tries to manage her business as well as fill in as the town’s mayor due to her predecessor being under federal investigation and not permitted to perform his duties. Bitter about his situation, Mayor Henry Gowen (Martin Cummins) offers no help to Abigail, who quickly finds herself in over her head. Finally, a traveling salesman arrives in town providing comfort for some and arousing suspicion in others.

Now being that I am not an avid fan of the television series, the special could have greatly benefited from a Previously On section at the beginning of the story. It wasn’t difficult to follow when the movie began, but a brief recap from the start would have helped avoid confusion such as when they speak of certain characters, particularly Leland and Rosemary being on honeymoon, we could have avoided the preliminary confusion about who those people are. It is also makes it difficult to know what stage of their relationship the two leads are in. I must say for a romance series, the two leads who are assumed to be passionately in love, are very tame in their expression in that love. Perhaps it has something to do with the time period of the series.

Once past the initial confusion, the storyline unfolds pretty well, avoiding becoming predictable or cliché for the most part. There are a few areas where you could tell what was going to happen long before we actually got to that point, but that is indicative of many shows with the similar format. There is much going on in this hour-and-a-half special, perhaps too much. I understand that every subplot may answer questions that the loyal fan base may have in regard to the situation following the season finale. Speaking for the newcomers, it is a bit too much to follow. The time spent on the Abigail subplot may have been best saved from the next season rather than the Christmas special, as it didn’t really fit the theme of the overall story.

There is an established rhythm to the cast dynamic and storyline that only comes from experience. Beforehand, I wouldn’t have thought a show of this caliber would have lasted as long as it has, but I can see why it has. It gives a charming appeal to small-town living, as everyone is so nice and works to together as a team to get ahead rather than stepping on one another, with a couple of added exceptions, of course (shame on you, Mayor Gowen).

Jeremy Butler is a film school graduate of the International Academy of Design and Technology. He is been writing for Upcomingdiscs since 2012; however, movies have played a big part of his life for much longer. Favorite genres include horror, science fiction/fantasy, and comedy. Favorite movies are V for Vendetta, Boondocks Saints, Kiss Kiss Bang Bang, and The Godfather.
Wilson A Kind of Murder (Blu-ray)