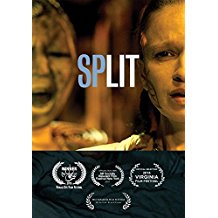 Let me preface this review by clarifying that this is not M. Night Shyamalan’s 2016 thriller about a dangerous man with different personalities. Instead, this review addresses Deborah Kampmeier’s Split (2016). It is an unfortunate circumstance for films to share the same name when released in the same year, especially if one of the directors has a considerable amount of fame under his belt. Thankfully, Kampmeier’s film came through the Upcoming Discs hub; otherwise, I might never have heard about it through my traditional consumption. Split is most certainly worth the watch, but the imagery is uncomfortably intense for the majority of the film. To the average film consumer, I offer a fair warning to stay away. However, Split delivers image after image of disturbing symbolism, nearing the caliber of Alejandro Jodorowski.

Split tells the story of an exotic dancer/actress Inanna (Amy Ferguson) in New York who is finding it hard to overcome her stage fright. As the film progresses, she falls in love with Derek, her production’s mask maker (Morgan Spector), a troubled man unable to let go of his traumatic past. As their relationship grows, they marry, but that only begins to create a restlessness within their relationship. She discovers that Derek is now cold and distant: instead of the mysterious, charming man she met on set, he is a tortured, brooding soul indoors. Derek’s behavior becomes more erratic when Inanna’s production includes a scene in which she must sleep with a man. As Derek’s behavior worsens, Inanna begins to have surreal hallucinations involving the production she’s involved in.

The first thing that really surprised me about the film was the strength in acting. Amy Ferguson is a powerhouse. I’ve only ever seen her in small parts prior to this film, but she has enough presence and personality to really sell the part. Her range is really encapsulated in this film: She starts a timid girl then eases into a sensual lover, but every other scene she is required to be angry, uncomfortable, or horrified. The emotion that she was required to convey the most was confusion, which contributes to the overall tone of the film. There are so many unsettling and confusing scenes that we must watch as an audience, and our only constant through the chaos is Inanna, a woman who looks more confused and frightened than we are.

The film’s other strength is the disturbing imagery, that is indeed challenging to watch. Most of the scenes involve a large theatrical performance that includes naked women of all shapes and sizes. If you have a hard time with that idea, consider that to be the most tame part of the film. The theatrical performance is largely interpretive with themes of a woman’s sexuality and involves a large amount of vaginal close-ups and masturbation, coupled with violent writhing and screaming. The idea here is that these scenes are not intended to service the “male gaze” of Hollywood, but rather study the complex social constructs surrounding the sexuality of women. Whether it be women with an active libido (heterosexual or homosexual), victims of abuse or sex trafficking, women dealing with marital rape, and so on; the in-film production (and the film by proxy) makes bold statements about women as sexual beings. With that said, if you are not prepared for that, or if you can’t stomach the masturbatory themes of the film (all characters other than Inanna engage in self-pleasure, sexual or not), I recommend not watching it.

This is an art house film with its head in the right place. Its themes are abject and derive all of their meaning from the feminine experience. It is a film that you must be willing to communicate with: to enjoy it is to accept and understand. Yes, it does share its name with Shyamalan’s new hit film, but the intricate feminine themes provide the viewer with a unique intellectual experience that would be otherwise hard to come by. If you enjoy visually and mentally challenging imagery, Deborah Kampmeier’s Split breaks through the feminine mystique with a horrifying, yet deliberately crafted dreamscape.