Where the Buffalo Roam

Posted in: No Huddle by Brent Lorentson on June 9th, 2017 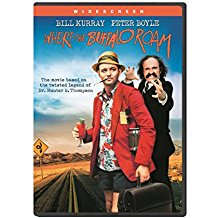 When it comes to Dr. Hunter S. Thompson, I view the man as an American legend and the ambassador of the sixties and the seventies. He was the voice for those who were misfits to society, and he was a nightmare for the establishment. Many people watched Fear and Loathing and Las Vegas and formed their opinion of him, thinking he was just a drug-consuming madman who somehow managed to get a gig as a writer for Rolling Stone magazine. Though there are glimpses of truth in this character, it was more a fictional creation named Raul Duke that Thompson created to tell his narrative. Where the Buffalo Roam I had hoped would be a film much closer to the real-life Thompson, but instead it seems to be more about the character of Duke as well.  Shout Factory has dusted off this title from 1980 and delivers a gem with Bill Murray staring as Hunter S. Thompson. How is the film? Where does it take us? Hop into the back seat,and we’ll go on this weird journey together.

As the film opens, we meet Thompson as he is hard at work trying to meet a deadline with his latest article. With his trademark cigarette holder clinched between his teeth, he pours himself a glass of Wild Turkey and begins to scream manically, shooting his pistol around the room. The film wastes no time getting us into the head space of Thompson as we watch him work out some of his issues while talking with his dog as well as an effigy of President Nixon. Clearly he’s a man tormented by personal demons as well as numerous substances that are legal as well as many that are not.

The film flashes back as we see Thompson covering a story for his friend and lawyer Carl Lazlo (Peter Boyle). Lazlo is representing several youths that have been arrested for drug possession and other drug-related charges. Lazlo is far from the conventional lawyer, as we see him perform in the courtroom as though he were the ringmaster of a three-ring circus. Lazlo to a degree is the core focus for Thompson in this film; despite as we see him bounce from one story to the next, Lazlo is always nearby ready to make a grand entrance. As we see Thompson and Lazlo go on their crazy misadventures together, one can begin to wonder if Lazlo is even a real person or simply an exaggerated character from Thompson’s drug-fueled mind. The question is even posed towards Thompson later in the film if Lazlo is even real, because he’s such an outlandish character.

At its heart I see the film as a bit of a bromance that is shattered over the course of time between a pair of wild personalities. We go through many of the good times that Thompson and Lazlo shared but the moments that seem to linger and sting the most are the ones that seem to pick away at Thompson and his career and livelihood.  It’s the ultimate thrill ride for these two that never stopped and pushed the mind and body to extremes that are inhuman. It’s the moment when Thompson comes to realize how toxic Lazlo is in his life that I feel is the equivalent of the partner in any romantic relationship coming to realize their partner is simply no good for them.

A film like Where the Buffalo Roam is unfortunately dated, and the cinematography is a bit generic when you compare this to Terry Gilliam’s take on Fear and Loathing in Las Vegas that is simply a cinematic acid trip by comparison. As for the performance Murray gives as Thompson, well, this is Murray when he was simply a comedic force who ruled the big and small screen.  Had I seen this before seeing Johnny Depp’s take on the character, perhaps I’d appreciate it more, but it always felt like it was Bill Murray impersonating Hunter S. Thompson, whereas Johnny Depp simply was the character.  It’s impossible to not want to draw comparisons between the films, but Where the Buffalo Roam feels the more genuine of the two.  Whether it’s Thompson reporting on the Super Bowl or Thompson getting involved with a shady arms deal or meeting Richard Nixon in the bathroom, it is simply a bonkers ride from start to finish.

On the disc we also get a 40-minute interview with screenwriter John Kaye.  This is one of those interviews that impressed me with how candid the writer was willing to get about some of the behind-the-scenes battles and real life adventures with Thompson. For fans of Thompson, this is an interview that is definitely worth taking a chance to view.

Brent Lorentson is a horror writer and film critic based out of Tampa, Florida. With a BA in Digital Film, he co-wrote and co-directed Scavenger Hunt. His short stories have appeared in various horror anthologies. In 2019 his short script Fertile Blood will be a part of the anthology horror film Slumber Party. He is currently working on his first novel A Dark and Secret Place set to be released in late 2019. Favorite Films: Taxi Driver, Fight Club, I Saw the Devil, The Wild Bunch, Dawn of the Dead, A Clockwork Orange, Pulp Fiction, Heathers, The Monster Squad, and High Fidelity.
Beauty and the Beast (2017) (Blu-ray) Megan Leavey