Cheech And Chong’s Next Movie 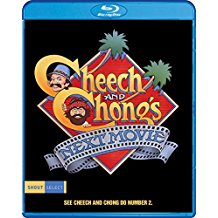 One of the reasons that I love reviewing movies is that it allows me the opportunity to see things that I wouldn’t normally watch. In most cases, it is a film that has been newly released, whether it be a theatrical release or a straight-to-DVD release. However, in other cases it is an older film that is being re-released. Such is the case for Cheech and Chong’s Next Movie. Though I have never seen any of the films, the names Cheech and Chong are synonymous with stoner comedy. Ideally, I would have liked to have seen the first film before diving into the middle of the franchise. Fortunately for me, I’ve been informed that there is no specific tie-in linking the films together, making it relatively easy to follow the storyline. It was only when I was introduced to space cocaine that things became a bit confusing.

The adventures continue with Cheech and Chong, although Cheech’s cousin Red books more screen time this time around than Cheech, as he and Chong find trouble at every pass. Whether it be at a brothel or in the far reaches of other space, these two are dangerous when they are together and even worse when they are apart. Such is the case for this story, as Chong is left on his own with Cheech’s relatives while Cheech tries to secure some alone time with his lady.

Needless to say, Cheech and Chong are two stoners who are basically coasting through life. No grand ambition, no drive. Merely the strong impulse to get high. Nothing illustrates this existence better than the opening scene of them siphoning off gas for a car that doesn’t even belong to them. The story continues along that kind of hilarious path, no real premises if you ask me. The best way I can thing to describe it is the day in the life of a stoner. Which is not to say that it was not enjoyable. I don’t normally enjoy stoner humor, but I must admit that I had more than a few genuine laughing-out-loud moments while watching the movie, such as watching the desk clerk (Pee-Wee Herman, also known as Paul Reuben) keep ending up with the raw end of the stick when trying to take down Chong and Cheech’s “kinda” cousin, Red (basically Cheech Martin with different hair). I’ve never been a fan of Pee-Wee Herman, but seeing him in this setting, I couldn’t help laughing at that, especially the “I know you are but what am I” part.

There are a lot of funny parts that went right over my head, the side effect of being born in a separate generation. The sequence where Chong sits with the crazy people and they all start doing weird stuff and making obscure references was lost on me. Also, I think it could have been improved upon if Chong was slightly more active in that scene. He kind of just sat there watching; it would have played better if he we doing something weird and was confused for one of the crazies too.

Another thing worth noting is the authentic performances that both Cheech and Chong give as stoners, which based off what I’ve been told is made all the more impressive given that during this time, both of them were not actually stoners. That statement is no longer true today, obviously, but apparently while portraying the parts of stoners for multiple films, they were actually sober. Seeing as they were both sober, it provoked a very interesting question in my opinion in regards to who portrayed the better stoner: Cheech or Chong? For the purpose of this argument, I will be counting Red, Cheech’s “kinda” cousin as him. Cheech passed out and visualized a vivid Aztec dream, but then again Chong is the one who tried to smoke a roach, pun intended.

Jeremy Butler is a film school graduate of the International Academy of Design and Technology. He is been writing for Upcomingdiscs since 2012; however, movies have played a big part of his life for much longer. Favorite genres include horror, science fiction/fantasy, and comedy. Favorite movies are V for Vendetta, Boondocks Saints, Kiss Kiss Bang Bang, and The Godfather.
Cars 3 Tuesday Round Up: June 20, 2017