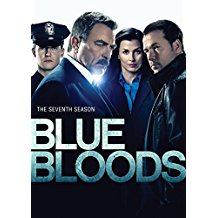 Tom Selleck is Frank Reagan. He’s the police commissioner of the NYPD. He’s no stranger to the job. In fact, police is the Reagan family business. His father Henry (Cariou) was the commissioner before him, who was fired for his brutal honesty and straight talk. His father is a constant reminder that the job is not always just about policing the city. There are politics to deal with no matter how hard he tries to avoid them. His son Joe was killed in the line of duty. His elder son Danny (Wahlberg) is one of the force’s best detectives. His youngest son Jamie (Estes) is a on the force. He has a Harvard law degree, but he decided to give up the idea of a law practice to go into the family business. Daughter Erin (Moynahan) is not a cop. But that doesn’t mean she’s out of the loop. She is a lawyer who works for the DA’s office. When the Reagans gather for their traditional Sunday dinner, the family chatter often involves dead bodies and hard criminals.

Each week there is the traditional case-of-the-week format. The cases get played out pretty much the way a normal cop show might play, and then there is the family dynamic. Cases might cause friction and stress between the family members. Here is where the performances and strong characters make this a very different show from the rest of the police dramas out there.

There’s just enough of the mythology arc to keep things interesting. The stories are usually standalone, and you will enjoy this slightly different take on the cop show.

A couple of Sopranos stars guest on this season. It starts with the first episode and Michael Imperioli as a lawyer who pushes Danny hard on the shooting case from last season. Danny has to relive the nightmare, and all the while Frank is torn because a mother wants him to talk her son out of joining the police. That brings back hard memories for Frank about losing his own son. We also have Steve Schirripa as pretty much a regular this season. He plays Anthony Abetemarco, an investigator for the DA’s office who is a tough guy working for Erin.

It’s a tough emotional season for Frank, who has to deal with a cheating scandal at the academy. He has to deal with unfortunate favor requests like the aforementioned mother and even friends, one played nicely by guest star Saul Rubinek. He has to deal with a potential whistleblower who accuses the department of corruption. Danny gets targeted and his home is firebombed because of a case. This is the kind of both drama and family moment that makes this show something special. The mayor finishes the season by announcing his retirement. You know that’s going to bring a political storm to the show’s 8th season, to be sure. It’s a relationship on the show that will be missed.

The release provides you with all 22 episodes on six discs. You get the usual CBS half-hour season wrap-up along with deleted scenes, gag reel, and episode-specific production features. This is a crime drama that’s all about family. Not that kind of family. These are the good guys, and “This family does not stand down…ever!”

Gino Sassani is a member of the Southeastern Film Critic's Association (SEFCA). He is a film and television critic based in Tampa, Florida. He's also the Senior Editor here at Upcomingdiscs. Gino started reviewing films in the early 1990's as a segment of his local television show Focus. He's an award-winning recording artist for Omega Records. Gino is currently working on his 8th album Merchants & Mercenaries. Gino took over Upcomingdiscs Dec 1, 2008. He works out of a home theater he calls The Reel World. Favorite films: The Godfather, The Godfather Part II, The Body Snatcher (Val Lewton film with Karloff and Lugosi, not the pod people film), Unforgiven, Gladiator, The Lion King, Jaws, Son Of Frankenstein, The Good, The Bad And The Ugly, and Monsters, Inc.
Baywatch (UHD Blu-ray) (4K) Supergirl: The Complete Second Season (Blu-ray)