Posted in: The Reel World by Brent Lorentson on September 2nd, 2017 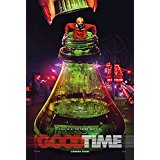 Every once in a while a film comes along that not only takes you by surprise but exceeds all expectations and just sticks to you. Last year it was La La Land, and this year for me it is Good Time.  Checking out the trailer after the film began to pick up some buzz on the internet, I thought that it looked good, but nothing about the trailer stood out to me to lead me to believe this was anything special.  But the thing that the trailer just doesn’t seem to capture is the experience. As you often see the tagline “a thrill ride”, this may be the first time in a long time where I feel this generic tagline actually fits, because that is precisely what this film is.  From the moment the film takes off, it doesn’t let up till the closing credits begin.

First off, for all those who see Robert Pattinson in the cast and roll your eyes, let me just say this is the role that will change your opinion of the man.  Since doing the Twilight films Pattinson has done just about all that he can do to leave that role in his past and become something more than a pretty-boy actor. He’s had great roles; one of my favorites was a supporting role in the Aussie thriller The Rover, and early this year he took on the role as a grizzled adventurer in The Lost City of Z. Now we get him as the relentless scumbag bank robber Connie in Good Time. He hasn’t been better, and if this role doesn’t have him as an award contender for best actor, then there is something seriously flawed with the system.

When the film starts we are with Connie’s brother Nick (Benny Safdie,) who is being tested for his mental state for possible admission into a facility.  We get that there is something wrong with Nick, that he’s slower than most, but he is also a man filled with a lot of emotion.  So often in films when we see an actor take on a role of someone with a disability we see the performance the actor is giving and we’re just struck like, “Wow, Sean Penn was good in I Am Sam”. What benefits Benny Safdie in the role of Nick is that he is an unfamiliar face, and it allows us to see the character and appreciate the nuance he’s put into this character so that we don’t see a performance, but instead we see Nick. Then we have Connie charging into the session to take his brother out, and we see this unlikely pair pull off a bank heist and the film is full speed ahead.

While Nick may be slow, Connie is a constant burst of adrenaline who can’t manage to slow down and think, and he is the perfect catalyst for this film as Connie is constantly on the move and relentless to anyone who comes in his way.  The bank heist is a bust, and in the process Nick is captured by the police. Connie understands his brother won’t last long behind bars and wants to bail him out, so he goes to a woman he’s seeing to put up the bail money. Jennifer Jason Leigh comes into the film in a brief but impactful supporting role as the girlfriend, but things don’t work out so well with the bail money, and she is quickly left behind when Connie discovers his brother is actually in custody at a local hospital.  Quickly his plan goes from bailing his brother out to breaking him out of the hospital.  And the film just keeps going in manic directions at a frenzied speed.

Just wait for the head-spinning sequence of a character recounting his first day of freedom to Connie that results in the character being held in protective custody; he manages to make Connie seem like the cool collective one.

Sprinkled throughout the film are some great characters and performances by numerous actors that are new to the scene. Barkhad Abdi (Captain Phillips) even has a brief but memorable part in this film as a security guard at an amusement park.  Just how this film manages to find its way into an amusement park is simply a part of the insanity that makes this film great.

What stands out the most about this film is the overall look that constantly had me thinking of the early works of Martin Scorsese. This easily could have been a film that would have fit between Mean Streets and Taxi Driver.  Directors Benny and Josh Safdie achieved something here that I don’t say lightly: they do Martin Scorsese better than Scorsese does himself these days.  The crafting and momentum of this film is done with such care that it’s hard to believe that this is the first “successful” feature these guys have done. This is gritty and profound, the kind of film we don’t see any more.  This is a revival of the golden age of cinema hitting the new generation on a grand visual scale.

To pick a favorite moment in this film is impossible for me, because this is a wonderfully stitched together film of kinetic moments that will keep you on edge but laughing at the insane absurdity of it all. While the film is a great throwback to the late 70’s with its style, it is genuinely a breath of fresh air.  Personally this has been one of my favorite years at the cinema, and for a while Logan was my favorite film of the year, but Good Time simply left me floored.

Brent Lorentson is a horror writer and film critic based out of Tampa, Florida. With a BA in Digital Film, he co-wrote and co-directed Scavenger Hunt. His short stories have appeared in various horror anthologies. In 2019 his short script Fertile Blood will be a part of the anthology horror film Slumber Party. He is currently working on his first novel A Dark and Secret Place set to be released in late 2019. Favorite Films: Taxi Driver, Fight Club, I Saw the Devil, The Wild Bunch, Dawn of the Dead, A Clockwork Orange, Pulp Fiction, Heathers, The Monster Squad, and High Fidelity.
Shakes the Clown (Blu-Ray) Tuesday Round Up: September 5, 2017