Posted in: The Reel World by Brent Lorentson on September 9th, 2017 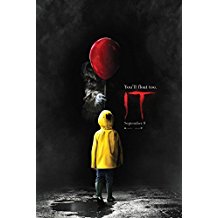 Mike (Chosen Jacobs) was always the last addition to The Losers Club, but in the film he is given more to do as he deals with some dark personal horror. Our first moment meeting the character he’s expected to kill a sheep with a bolt gun.  This scene early on definitely makes it clear that this is not a film for the kids necessarily but definitely shines a light on the fact that some kids are forced to turn their back on their childhood and grow up far too soon. Beverly (Sophia Lillis) is in the same boat as Mike where she is forced to grow up far too soon. She’s looked down upon by everyone in town, even has adults making unsettling advances on her, and when it comes to her interactions with her father, well, it’s damn near impossible not to love this character when you see her with her friends.  Lillis does so much with her performance as Beverly that you can only expect great things from her in the future. When it comes to casting the adult versions of these characters, you’re going to be hard pressed to find an adult who matches this talent, thought my pick would be Amy Adams.  The face that most will recognize from the group is Finn Wolfhard, who plays Richie.  Wolfhard has had some success as one of the stars in Stranger Things, and here he does a great job at being the funny man of the group. Matching Richie with the comedic jabs is Eddie (Jack Dylan Grazer) who I thought was the scene-stealer in the group. But if there is a character in the group that I felt was lacking, it is Bill (Jaeden Lieberher) who is mostly the leader of the group, but unfortunately just doesn’t have the presence that reflects the role.  To a larger degree it seems more that the group goes along with his decisions simply because they feel obligated, since he’s the one who lost his brother. There’s Ben (Jeremy Ray Taylor), who is the new kid at the school who has his not-so-secret crush on Beverly, and then there is Stanley (Wyatt Oleff), the quiet but practical one of the group.

Brent Lorentson is a horror writer and film critic based out of Tampa, Florida. With a BA in Digital Film, he co-wrote and co-directed Scavenger Hunt. His short stories have appeared in various horror anthologies. In 2019 his short script Fertile Blood will be a part of the anthology horror film Slumber Party. He is currently working on his first novel A Dark and Secret Place set to be released in late 2019. Favorite Films: Taxi Driver, Fight Club, I Saw the Devil, The Wild Bunch, Dawn of the Dead, A Clockwork Orange, Pulp Fiction, Heathers, The Monster Squad, and High Fidelity.
Granny Of The Dead Irma Visits Upcomingdiscs HQ