Posted in: No Huddle by Gino Sassani on October 1st, 2017 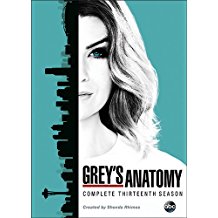 “If it ain’t broke, don’t fix it. The saying’s as true of the human body as it is of a washing machine or a blender. A good surgeon knows that if you go screwing around with something that doesn’t need screwing, you are the one who is liable to end up screwed.”

One of those things on television that doesn’t appear “broke” is Grey’s Anatomy, heading into its 14th season on ABC. By now Shondra Rhimes must own a pretty big piece of ABC. OK, she doesn’t likely own any of Disney, ABC’s parent company, but if this were a game of Monopoly, Rhimes would be smiling all the way to the fake bank. She owns more real estate here than anyone else. And while she may not be laughing all the way to the fake bank, I suspect the real banks are holding a good stash of cash for the Madam of Prime Time.

If you want some history of the show, we’ve reviewed most of the eight seasons that have come before now. You can catch them here: Previous seasons. But this is not the kind of a show you can just start with on the 13th season and get much out of. If you’re not familiar with the cast and crew, start from Season One and work your way up. This review just isn’t for you. Fans wanting to continue the ride…read on.

It’s become a bit of a tradition over the last few years that a character exits Grey’s Anatomy each year. Usually it’s someone big. Rhimes likes to get you to fall in love and then rip them away from you when you least expect it. Of course, actors and contracts really determine these things as often as a sadistic writing room. This season it was Sara Ramirez’s Callie Torres. She’s been there almost from the start and is the gone character starting Season 13. The rather interesting thing here is that I do not recall one mention of the character throughout the 13th season. That part is a bit unusual. By the time the season ends, it is Jerrika Hinton who is leaving the show for a new series called Here, Now. So, that tradition has been carried over to the 14th season.

Along with all of the rotating beds and interesting patients, there are two rather large story arcs that play out over Season 13. The first actually picks up from the final moments of Season 12 when Alex (Chambers) walks in on Jo (Luddington) and DeLuca (Gianniotti) in what appears to be a compromising situation. He ends up beating him so bad that he requires extensive surgery, and it’s the potential end of his career. The result is an arrest, and he faces the possibility of prison time. That story pretty much plays out for the first 10 episodes or so. There are consequences down the road, but it eventually yields to a much larger story that delivers most of this season’s drama.

Catherine (Allen) pressures Bailey (Wilson) into hiring a gung-ho new head of teaching for the hospital when it appears students fail there but become stars elsewhere. Worse, they do it behind Weber’s (Pickens, Jr.) back. When Dr. Eliza Minnick (Dominczyk) bursts into the scene, a civil war begins that puts pretty much all of the characters on one side or another. This is one of the biggest and most effective story arcs the series has ever done. For a while the focus isn’t so much on who is sleeping with whom and becomes more of a look at the internal politics of a place like this. Well… at least until Arizona (Capshaw) decides she finds the young woman attractive and betrays her friend. Too often the show has hinted at these kinds of things but pulls back too quickly with a sudden and often unlikely solution like buying the hospital. I give the writers credit for playing this one out for all of the drama they could. It pays off quite wonderfully.

This also brings some of the character motivations and personalities to the surface. Honestly, I’ve never liked the Catherine Avery character. I always found her a bully and morally bankrupt. That’s not often a problem on a show, but I honestly don’t think the writers are doing that intentionally. Rhimes is huge on creating powerful women, and I suspect they see Avery’s flaws as positive traits.

In the fiery season finale we get a sub-story that gives me a chance to say I told you so. Years ago when Owen’s (McKidd) old buddy and brother-in-law Riggs (Henderson) they were fighting over the death of Owen’s sister and Riggs’s wife. But I pointed out in my review then that her body was never recovered and will certainly be the spark of a story in the future. I was sure we would see her again. It’s just a glimpse, but she figures to play a huge part in the current season. I told you so!

You get all 24 episodes on six discs with deleted scenes and a short gag reel.

Grey’s Anatomy has resurrected itself from more than one season on the bubble. Now it goes into a 14th season with the long-anticipated next spinoff due to arrive soon. Rhimes continues to dominate the network’s prime-time schedule. It’s fair to ask how I keep up with it all. “Writing it down helps me remember.”

Gino Sassani is a member of the Southeastern Film Critic's Association (SEFCA). He is a film and television critic based in Tampa, Florida. He's also the Senior Editor here at Upcomingdiscs. Gino started reviewing films in the early 1990's as a segment of his local television show Focus. He's an award-winning recording artist for Omega Records. Gino is currently working on his 8th album Merchants & Mercenaries. Gino took over Upcomingdiscs Dec 1, 2008. He works out of a home theater he calls The Reel World. Favorite films: The Godfather, The Godfather Part II, The Body Snatcher (Val Lewton film with Karloff and Lugosi, not the pod people film), Unforgiven, Gladiator, The Lion King, Jaws, Son Of Frankenstein, The Good, The Bad And The Ugly, and Monsters, Inc.
American Made “31 Nights Of Terror” Contest – Win The Cabin In The Woods on Blu-ray