The Mountain Between Us

Posted in: No Huddle by Gino Sassani on October 8th, 2017 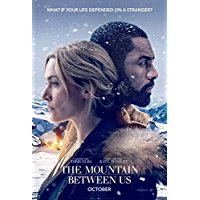 “History doesn’t repeat itself, but it rhymes. – Mark Twain”

Last year Leonardo DiCaprio walked away with an Oscar for his performance in the winter wilderness survival film The Revenant. The film also took statues for its amazing cinematography and also for direction. By the time I was finished screening The Mountain Between Us, I had already started to have flashbacks. Consider this movie to be a Revenant built for two. The film has a great many of the same strengths as last year’s epic. I wouldn’t be surprised at all to see at least nominations for Hany Abu-Assad for director in his first English-language film. Mandy Walker could very well win for her breathtaking cinematography. And both Kate Winslet and Idris Elba should at least get a good look in the best actress and best actor categories respectfully. There’s no question that The Mountain Between Us should at least be nominated for the same hat-trick that The Revenant scored in 2016. Still. As much as these films are the same, there is a world of difference to be found as well.

We find ourselves at an airport where the snow has caused the cancellation of outbound flights. Ben Bass (Elba) is a surgeon who needs to operate on a young boy the next morning. His patient can’t afford the delay. Alex Martin (Winslet) needs to be in New York the next day to be married. Alex overhears Ben’s situation and comes up with the idea that they can share a private flight out with devil-may-care pilot Walter, played perfectly by Beau Bridges and his faithful dog. He’s willing to chance the storm and is sure he can get his two passengers to their connecting flights on time. Now, you likely think you know where this is going, right? Wrong. It’s not the storm that takes out the small plane, but the sudden stroke suffered by the pilot in a nice little diversion from the obvious plot device here. Ultimately, it ends up amounting to the same situation. Walter’s dead, and the two passengers are pretty banged up. The temperature is below zero, and there’s a biting frigid wind. They take shelter in the broken fuselage of the plane. But as time goes by, they get on each other’s nerves a little, and Alex comes to the conclusion there is no rescue coming. You see, Walter didn’t file a flight plan. Eventually they have to attempt to make their way through the high-altitude wilderness to have any chance of surviving.

While the film certainly trades on some of the same beats and elements from The Revenant, including a wild animal attack, this film allows for more of an emotional journey, because you have two characters here, and it doesn’t hurt that one of them is the dynamic Idris Elba. Showing the presence here he couldn’t quite wrangle for The Dark Tower, Elba is as strong a force of nature here as the chilling elements. This is often a still and quiet film, but Elba is quite capable of holding your attention with merely a look. I didn’t feel the same kind of power coming from Kate Winslet, but she holds her own quite well. The real masterful work here is how well the characters evolve and slowly build the kind of chemistry that keeps the film moving and interesting. All the while we’re treated to such amazing vistas that rival any mountain film I’ve ever seen. Abu-Assad lets his actors do their best, all the while giving them the support of the surroundings and a tight script. Pacing here is perfect. He doesn’t rush the relationship beats, and things change just before they settle too much in any single direction. At its core, this is as much a romantic film as it is a survival story.

It’s a group effort here. One of the screenwriters is Chris Weitz, who participated in the Rogue One script. That film was helped along by its careful balance of intimacy and large scale. A Mountain Between Us proves that was no fluke. This is an incredibly intimate film. It’s claustrophobic, all the while delivering a majestic and large scope to the environments. It avoids the pratfalls for these kinds of films that usually derive from a lack of confidence in what you’re doing. While on the mountain we pretty much remain on the mountain without the need to explore these character’s previous lives with endless flashbacks. It isn’t until we’re back in the civilized world that things fall apart a little. The coda is overlong and this time takes the easy way out. It’s just so darn anticlimactic and holds us in our seats just a little too long. Often your last impressions are what you leave the theatre with. Fortunately, the film delivers enough emotional impact to survive the ending. And isn’t that where all near-great films usually come undone? “I think we might have the same problem.”

Gino Sassani is a member of the Southeastern Film Critic's Association (SEFCA). He is a film and television critic based in Tampa, Florida. He's also the Senior Editor here at Upcomingdiscs. Gino started reviewing films in the early 1990's as a segment of his local television show Focus. He's an award-winning recording artist for Omega Records. Gino is currently working on his 8th album Merchants & Mercenaries. Gino took over Upcomingdiscs Dec 1, 2008. He works out of a home theater he calls The Reel World. Favorite films: The Godfather, The Godfather Part II, The Body Snatcher (Val Lewton film with Karloff and Lugosi, not the pod people film), Unforgiven, Gladiator, The Lion King, Jaws, Son Of Frankenstein, The Good, The Bad And The Ugly, and Monsters, Inc.
“31 Nights Of Terror” Contest: Win Peanuts Holiday Anniversary Collection “31 Nights of Terror” Gerald’s Game