Posted in: No Huddle by Gino Sassani on October 9th, 2017 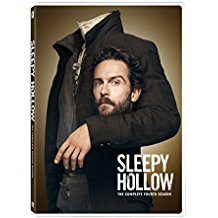 “Welcome to The Vault, the most amazing library ever. An archive of the incredible. A repository of the impossible. A storehouse of secrets great and small. This is the untold history of America.”

Things have not been going so well for Ichabod Crane and his fight against the supernatural. The show has had trouble finding an audience as well as a footing. Season Four marks the second time the show has been re-tooled in order to tweak whatever keeps it from completely catching on. Unfortunately, it wasn’t quite enough. The CW’s Supernatural is going into its 13th season, so we know there’s a market out there for this stuff. But it’s hard to pull off, as the many efforts that never made it out of their first few episodes could bear witness. But for these witnesses they made it to four short seasons, and you are now about to bear witness to the end of the fight as Fox delivers the last 13 episodes of Sleepy Hollow on DVD. Faith in the show had fallen so far that the show hasn’t been available on Blu-ray since Season Two. So DVD’s all you’re going to get here, and it’s going to have to be enough.

The retool begins with the location of the action. The series title becomes a bit problematic when Crane begins the season in federal custody being interrogated about the death of Abbie, who will not be a part of this final season. He escapes to find himself in Washington D.C. It doesn’t take him long to happen upon a decapitated Lincoln Memorial and a demon John Wilkes Booth who has already killed and is now confronted by Homeland Security Agent Diane Thomas, played by Janina Gavankar. Through the course of the investigation she finds Crane useful, and a new partner is joined. But Thomas is not a witness. That distinction falls to her 11-year-old daughter Molly (Yaffe). The investigation leads to a secret Smithsonian archive, the aforementioned Vault. Here all of those secret supernatural records and artifacts are stored. The area is watched over by Alex Norwood (Melvin) and Jake Wells (MacKinnon). Up until now they didn’t understand what they were working with. Crane is the key that turns on all of the lights. Returning from previous seasons, Abbie’s sister Jenny (Greenwood) relocates to D.C. to help Crane and train the young witness. Now we have a complete Scooby Gang. Alex and Jake were obviously brought in to add a hipper element to the series in the hopes of attracting the young teens that flock to Supernatural.

New city. New digs. New big bad. Meet Malcolm Dreyfuss, played by Jeremy Davies. He’s a guy who once saw his life falling apart, so he makes the requisite deal with the Devil to get all he wants. Of course, he doesn’t want to pay off, so he begins to acquire artifacts to allow him to become immortal. If he doesn’t die, he doesn’t have to give up his soul. So Sleepy Hollow becomes the second series this year to turn The Philosopher’s Stone into a season Macguffin. At least The Flash brought along a Harry Potter mate to go along with it. Of course Team Witness figures out the plan and races to stop him as Malcolm puts all forms of demons and monsters in their path to try to stop him. That includes Crane’s old Buddy The Headless Horseman. The team even make a two-episode trip back to Sleepy Hollow. Things get worse when the team discovers that living forever and being rich just aren’t going to cut it for Malcolm. He’s had a vision of a future American despotism with him at the top of the throne. So when the headless rider arrives, he’s going after the President of the United States. Try explaining that one to the feds. There is a wonderful homage to the show that started all of these supernatural television efforts. At one point the rider dons a motorcycle in a shot taken directly from Kolchak: The Night Stalker which featured a headless biker killing the members of his old gang.

Turns out it’s going to be hard to stop Malcolm. He has a personal assistant who is just hell to deal with. I’m talking about the demon Jobe, played by Kama de los Reyes. It’s a strange plot development that left me scratching my head a bit. Jobe was Satan’s point man on Malcolm’s deal, but he ends up betraying The Lord Of Flies in order to help Malcolm not only rip off his boss but accepts a sub-servant position to Malcolm throughout. It takes Crane going to Hell to personally bargain with Satan to defeat Malcolm in the end. While there are some very good dystopian ideas with the big bad and a great performance by Davies, the plot never comes together the way I hoped it would. There are too many holes, and plot points are often rushed or ignored. The 13-episode run likely had something to do with that, I’m sure.

With this attempt to remake it, the series yet again it lost a lot of its charm. Crane doesn’t quite have the time to settle into his new situation and develop the kind of chemistry with the new team as it’s obvious could have happened. I missed the flashbacks to colonial days. They still have them, but not near as much as in the earlier seasons. Instead of Washington, Jefferson, or Franklin, the focus is on lesser known Benjamin Banneker, played by Edwin Hodge. Banneker was somewhat of a Renaissance man like Jefferson. He was a free African who designed several instruments, most famously his clock. He was also part of the group that surveyed the future home of the nation’s capital. The season makes him a part of Washington’s inner circle and aware of the supernatural fight. He designed The Vault that serves as the final season’s HQ.

“I have found my way back from Purgatory, the catacombs, and New Jersey. We will return.”

Sadly, that is not to be. The season finale is an exciting couple of episodes and begins to set up yet a third re-tool in just four seasons. A fourth season would have had the team now answering secretly directly to the President. When a show needs to change this drastically so many times, it might be time to say goodbye. That’s exactly what we are doing here with these final 13 episodes on four discs with only deleted scenes as extras. For Ichabod Crane and Team Witness, one can only say, “Situation: Dire. Prognosis: Grim.”

Gino Sassani is a member of the Southeastern Film Critic's Association (SEFCA). He is a film and television critic based in Tampa, Florida. He's also the Senior Editor here at Upcomingdiscs. Gino started reviewing films in the early 1990's as a segment of his local television show Focus. He's an award-winning recording artist for Omega Records. Gino is currently working on his 8th album Merchants & Mercenaries. Gino took over Upcomingdiscs Dec 1, 2008. He works out of a home theater he calls The Reel World. Favorite films: The Godfather, The Godfather Part II, The Body Snatcher (Val Lewton film with Karloff and Lugosi, not the pod people film), Unforgiven, Gladiator, The Lion King, Jaws, Son Of Frankenstein, The Good, The Bad And The Ugly, and Monsters, Inc.
“31 Nights of Terror” Gerald’s Game Tuesday Round Up: October 10, 2017