“31 Nights Of Terror” Exclusive Interview With Will Wernick, Director Of Escape Room

Posted in: Podcasts by Gino Sassani on October 15th, 2017 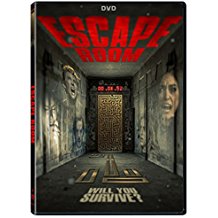 There’s no escape from our annual 31 Nights Of Terror. But there is room for plenty of more thrills and chills. Lionsgate has Escape Room on DVD this month. A group of friends celebrate a birthday by visiting one of those trendy escape rooms. There are puzzles and solutions to be found. But is there a way out? I had a chance to talk with the film’s director Will Wernick and he gave up a few clues about the new release. Bang it here to listen in on my chat with Will Wernick.

Gino Sassani is a member of the Southeastern Film Critic's Association (SEFCA). He is a film and television critic based in Tampa, Florida. He's also the Senior Editor here at Upcomingdiscs. Gino started reviewing films in the early 1990's as a segment of his local television show Focus. He's an award-winning recording artist for Omega Records. Gino is currently working on his 8th album Merchants & Mercenaries. Gino took over Upcomingdiscs Dec 1, 2008. He works out of a home theater he calls The Reel World. Favorite films: The Godfather, The Godfather Part II, The Body Snatcher (Val Lewton film with Karloff and Lugosi, not the pod people film), Unforgiven, Gladiator, The Lion King, Jaws, Son Of Frankenstein, The Good, The Bad And The Ugly, and Monsters, Inc.
“31 Nights Of Terror” Contest: Win Under Wraps Baby Driver (Blu-ray)