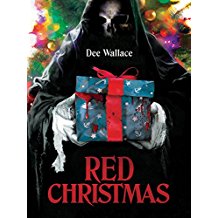 If you are just starting out your horror month, then you may want to make this terror film your first, as it has all the elements of a gruesome, ghoulish nightmare that you’ll remember beyond the big “H” day. A weird name for a film, Red Christmas certainly wreaks havoc on that holiday. Choosing Christmas for the film setting turns out the best way to get this family together so the goings could get bloody. Now on Blu-ray and DVD, it’s a good choice for your opening season fright party.

Diane McKenzie (Dee Wallace) has invited her family over for the holidays, and the house is buzzing as the last of the guests, her daughter Suzy (Sarah Bishop) and her husband Peter (David Collins), drive up.  Already on hand are Diane’s adopted daughter Hope (Deelia Meriel), her pregnant daughter Ginny (Janis McGavin) with significant other Scott (Bjorn Stewart) and her only son Jerry (Gerard O’Dwyer). Also attending is Joe McKenzie, Diane’s brother-in-law, who moved in to help with the family when Diane’s husband died.

The group rattles around snide remarks, tries to deliver a few jokes, tests a few tempers, and in a few cases complements each other. Jerry, the oldest sibling, has had a tough life being mentally challenged due to Down’s syndrome, but he’s more of the reason why they celebrate Christmas together.  Just when it’s time to open up gifts, there’s a hard rapping on the door. Upon opening it, a man dressed in rags and his face wrapped in gauze greets Diane. He says his name is Cletus (Sam Campbell) and hands her an envelope with the word Mother written on it. Seeing the man is cold, she invites him into the living room to share some Christmas cheer.

Thus begins a heinous holiday gathering that will reveal secrets, cause a lot of bloodletting, and reduce the number of family members. Director Craig Anderson moves his film along at a very fast pace once Cletus comes on the scene. He ties in a backstory that reveals a few twists that brought the ragged character to the McKenzie residence. Anderson then seizes the dank mood to start the grisly task of determining what characters are to be killed and with what weapons.

Using darkness to induce a bit of creepiness, Anderson introduces some wicked scares much like those at some of the good local “fright night houses”.  There are a few shocks that you’ll never see coming, and the quick kills are what keep the film on point.  Like in most horror shows they always work for a good shot of adrenaline after the slow burn, eliciting someone on your living room couch saying “why is she going out in the dark?”  Nice setups, cool sets, very good makeup, and a lot of bloody messes do make the film a fan-based delight.

Most of the actors are not familiar to the fans, but you should recognize Dee Wallace, who plays Diane McKenzie in this film. Wallace started her career in film 1974 as a waitress in “Lucas Tanner”, a TV series, and has since amassed over 225 credits in movies and television. Some of her horror/thriller/sci-fi flicks include The Hills Have Eyes, The Howling, E.T. The Extra-Terrestrial, Cujo, Alligator II: the Mutation, The Frighteners, Scar, Boo, Headspace, Abominable, Halloween (2007), Little Red Devil, The House of the Devil, Raven, The Lords of Salem and many more.

John Delia has been on all sides of the movie business from publicity, writing for publications and on line blogs, script writing, to film making. Writer, critic, film editor he has worked as a film critic on this second go around for 14 years. He earned his Bachelor’s degree at the college of Journalism and Communications at the University of Florida in Gainesville, Florida. John is an active member of the Southeastern Film Critics Association (SEFCA) . Favorite Films: Lord of the Rings/Hobbit trilogies, The Godfather trilogy, the Indiana Jones trilogy (I didn't like the 4th), The Avengers and for TV it's Game of Thrones. As for animation it's a tie between anything Pixar and everything Hayao Miyazaki.
Baby Driver (Blu-ray) Tuesday Round Up: October 17, 2017