Thank You for Your Service

Posted in: The Reel World by Jeremy Butler on October 27th, 2017 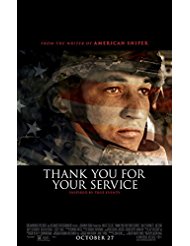 Thank You For Your Service is an enterprising look into what is like for some soldiers who return home from war. Some come back to find life has gone on without them, and so have the people they hold most dear. Some return only in body, with their minds reliving things that happened to them over there. Others will do anything just to go back, because that is the only reality that makes sense to them. All three of these circumstances are portrayed in a way that will hit close to home for some while allowing others an enriched perspective that will have them uttering those words with more emphasis than they would have in the past, “Thank you for your service.”

The story follows the return of three soldiers, Staff Sergeant Adam Schumann (Miles Teller), Specialist Tausolo Aieti (Beulah Koale), and Private First Class Will Waller (Joe Cole). The three of them survived the odds and hellish circumstances, which include IED detonations, firefights, and the loss of beloved comrades, and are returning home to resume their lives with loved ones who have been patiently awaiting their return. Although excited to be returning, each of them is struggling internally. For SSG Schumann, he is struggling to overcome the consequences to decisions that he made while in command, decisions that resulted in lives lost. Schuman also finds it difficult opening up to his wife, Saskia (Haley Bennett), who has been holding down the fort and raising their two kids in his absence.

In addition to his own issues, Schumann is constantly there for his returning mates who are finding civilian life just as difficult. PFC Waller came home to find his apartment empty, his bank account cleaned out, and the woman he was expected to marry in the wind, while SPC Aieti wants nothing more than to return to his unit, but is denied the opportunity due to a traumatic brain injury suffered in an IED detonation.

The Schumann character is the focal point of the story, as it is usually his perspective that drives the plot forward. Driving the story forward is a tremendous responsibilty. Fortunately, Miles Teller appears to be up to the task as he exhibits the leadership skills necessary to be portray a non-conmissioned officer. Speaking as a soldier, I would have no trouble following Teller into battle. He is this story’s heart, as he is the one who struggles the most to overcome his demons, all the while trying to help others. The dynamic between Teller and his on-screen wife, Bennet, is also rooted in reality and extremely relatable. From her perspective, she just wants him to open up to him. Ask veterans’ wives; that is possibly one of the number one causes of marital strife; the soldier believes that it is his responsibility to shelter his family from the ugliness that he or she endured, and by doing so a rift is created. Teller and Bennet do a phenomenal job playing up that angle.

The person who returns is not the person who left. That is often the story when it comes to returning vets and is also the primary theme of our story. In this case, of course, some of our returning soldiers are coming back from their third deployment and are adjusting to civilian life. It is difficult to note the passage of time, as it is usually only confirmed via the dialog. Truthfully, my first indication that months have gone by was during an argument between Teller and Bennet, where the latter reveals that she has been waiting months for him to open up. Some brief text on screen to note the passing of time would have been beneficial to following the story, as it is challenging to know if everything is happening over a passage of days or longer.

Other than that hiccup, I think matters unfold flawlessly, and no punches are pulled as many topics are undertaken in the two-hour runtime, including survivor’s gilt, PTSD, suicides, and drug use. As earlier stated, every subject is rooted in reality, and there is a reason for that; it is inspired by true events. That’s right; these characters are based on real life people who were forced to endure these circumstances. I was truly moved by this film as both a viewer and a solider. The story has such honesty and authenticity to it. It is gritty and does not shy away from subjects that are usually not discussed. It embraces the hardships that veterans face when returning including the overcrowding of the VA and the long waits for much-needed treatments. Every issue that you see in this film is something that a soldier faced upon their return. Witnessing it on the screen is sobering.

I highly recommend this film. In fact, I would love to see this film win the box office this weekend. If nothing else, those who see this film will gain a unique perspective into the lives of the men and women who are fighting for our individual freedoms. Whatever your stance may be on the military, you can’t help but appreciate the courageousness and dedication of those who wear the uniform, or why else would we thank them for their service? After watching this movie, all I wanted to do was find a veteran, take their hand, look them in the eye, and do just that. I have every confidence that the audience will have the same impulse.

Jeremy Butler is a film school graduate of the International Academy of Design and Technology. He is been writing for Upcomingdiscs since 2012; however, movies have played a big part of his life for much longer. Favorite genres include horror, science fiction/fantasy, and comedy. Favorite movies are V for Vendetta, Boondocks Saints, Kiss Kiss Bang Bang, and The Godfather.
Suburbicon “31 Nights Of Terror” Contest: Win 101 Horror Movies: You Must See Before You Die