Posted in: The Reel World by Gino Sassani on November 13th, 2017 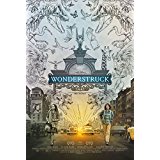 “We are all in the gutter, but some of us are looking at the stars.”

Going to see Wonderstruck is like going to see two movies at the same time. It’s a rather clever narrative that tells somewhat parallel stories from two different ages. There is a story that happens in Minnesota in 1977, while the other takes place in 1929 New Jersey. It isn’t hard to know which period you happen to be in, because they are filmed with distinct styles that match the environments of each time and place. The film is often beautiful to look at. But it’s an ambitious course that does not always embrace the audience. As the two stories begin to make some sense to us as a whole, the narrative starts to disappoint somewhat. Have you ever tried to follow someone to a destination that only they know how to reach? It’s up to the lead driver to glance backward from time to time to make sure the following car is still with them. Director Todd Haynes might not be my first choice in that lead car. He’s not necessarily very good at making sure we’re still with him. The closer he gets to his destination, the more frustrated and anticlimactic it all becomes.

In 1929 Rose (Simmonds) is a young deaf girl who runs away from home. Her father (Kincaid) doesn’t really know how to relate to the girl, who has an obsession with silent screen star Lillian Mayhew (Moore). Rose goes to New York in hopes of making a connection to the star and finds that there has been a connection all along. We kind of leave Rose exploring the vast rooms of New York’s American Museum of Natural History.

In 1977 Ben (Fagley) is a 12-year-old boy who has just lost his mother. He’s having a bit of a tough emotional time of it. He doesn’t know who his father is. Ben is also deaf thanks to an accident and sets off on his own adventure following a clue to his father’s identity to New York City. He meets young Jamie (Michael), and they spend some time on the streets of New York. Finally Jamie takes Ben to an old bookstore, where he meets a man with an obvious connection to Ben. That encounter leads them to you guessed it, the American Museum of Natural History, where Ben discovers there is a huge map/diorama of the city in a room dedicated to its display. It is in this display and the artist who created it that Ben is shown pieces of who he is and where he came from. At last the two stories converge.

Throughout the film we move back and forth from these two narratives. With each change we are given clues that the two characters do have things in common. Both are artists of a sort. Both are looking for something that might tell them something of who they are.

It’s all rather a nice and touching story that takes advantage of unique film styles to truly immerse us in each place and time. Rose’s story plays out almost like the silent films of her idol. As a result that portion of the film, while somewhat clever in design, fails to make as much of an emotional connection. Rose never feels quite as real to us as Ben ultimately does. The 1970’s scenes look quite authentic for anyone who has seen a classic 1970’s film. The colors are appropriately desaturated, and it brings me back to films like Dog Day Afternoon or Dirty Harry. But it’s Ben who makes the real emotional connect here. Oakes Fagley is rather brilliant in the role. The young actor manages to convey a lot with very little dialog. There is very little dialog in the entire film. Our ears are kept busy by a rather unique score by Carter Burwell, which is far from the traditional orchestrations we expect.

In the end the film offers a lot of style but fumbles with the presentation. Instead of truly accenting each other, the two styles tend to be somewhat awkwardly pieced together. There isn’t a natural flow that you find in films like The Godfather Part 2 that blends Robert De Niro’s early Vito years with the closer to contemporary exploits of Michael. That film is a virtual clinic on how to do what Haynes wanted so much to accomplish here. The screenplay by Brian Selznick is from his own book, which I suspect might well be a moving read. Even with some solid performances, the awkwardness comes through and keeps us from truly being pulled into the experience. Sometimes “it’s never the right time”.

Gino Sassani is a member of the Southeastern Film Critic's Association (SEFCA). He is a film and television critic based in Tampa, Florida. He's also the Senior Editor here at Upcomingdiscs. Gino started reviewing films in the early 1990's as a segment of his local television show Focus. He's an award-winning recording artist for Omega Records. Gino is currently working on his 8th album Merchants & Mercenaries. Gino took over Upcomingdiscs Dec 1, 2008. He works out of a home theater he calls The Reel World. Favorite films: The Godfather, The Godfather Part II, The Body Snatcher (Val Lewton film with Karloff and Lugosi, not the pod people film), Unforgiven, Gladiator, The Lion King, Jaws, Son Of Frankenstein, The Good, The Bad And The Ugly, and Monsters, Inc.
Murder on the Orient Express (2017) Tuesday Round Up: November 14, 2017