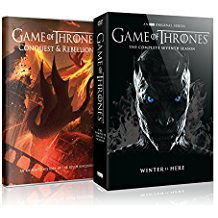 The countdown to Christmas has reached single digits! Hopefully, that means everyone on your naughty/nice list (which, I assume, you’ve checked twice) has been accounted for. But maybe that’s not the case, and you’re racking your brain for a last-minute gift idea. Fortunately, Upcomingdiscs has come to the rescue every Christmas with our Gift Guide Spotlights. These gift guides ARE NOT paid advertisements. We take no money to publish them. The kinds of things we recommend here are things we would be delighted to find under the tree.

For well over a decade, HBO has been producing some of the most extraordinary content on the small screen. This past year was no exception. Take a look at some of these complete sets that will be sure to please any fan of quality television.

“There is only one war that matters. The Great War…and it is here.”

Ever since Game of Thrones premiered in 2011, viewers have been tantalized by the notion that “winter is coming.” (And it’s been a *much* longer wait for book readers who fell in love with the first installment in George R.R. Martin’s “A Song of Ice and Fire” saga more than 20 years ago.) Ned Stark’s famous words have launched a thousand memes, and this shortened seventh season of HBO’s spectacular fantasy drama — 7 episodes instead of the customary 10 — seemed poised to begin delivering on their promise. While the show is still able to thrill audiences like nothing else on TV, the strain of wrapping up such an epic story finally started to show.

Thrones lost some of the key character moments that grounded its more fantastical elements. In previous seasons, viewers got to know characters (and characters got to know each other) as they spent multiple episodes traveling from one far-flung destination to another. In season 7, key figures traverse the continent with relative ease. (The worst offender is Ep. 5/“Eastwatch,” which is among the weakest installments in the series.) More importantly, the series that became famous for its cruel unpredictability became curiously timid about killing off fan-favorite characters. I’m not saying the show has to meet a kill quota, but there were a couple of instances where the series that used to gleefully kill off its noblest heroes strained to keep certain people alive.

But while this shortened, next-to-last season felt more rushed and tentative than any before it, let’s not get it twisted: Game of Thrones is still able to deliver in a way no other TV series can even touch. The cast continues to be uniformly strong, and the actors seem to get a boost from working with people they haven’t had a chance to share the screen with. Clarke and Harington have a low-key, simmering chemistry that absolutely works when they’re on screen together, even if their romantic spark feels a bit off. (The latter fact actually works in their favor for reasons that become clear in the finale/“The Dragon and the Wolf.”)

“I love my grudges. I tend to them like little pets.”

Big Little Lies — HBO’s star-studded and (deservedly) Emmy-winning limited series — is structured like a typical murder mystery. We know someone has been killed, but we don’t know the perpetrator or even identity of the victim. On top of that, the limited series format promises that we’ll actually have an answer by time these episodes wrap up (**cough** The Killing). But the reason Big Little Lies shines— other than top-notch performances and stellar direction — is because beneath the murder-mystery veneer lies a darkly funny drama about all manner of adult relationships: husband/wife, ex-husband/ex-wife, mother/daughter, mother/fellow-mother, and so on.

The miniseries, based on the 2014 best-selling novel written by Australian author Liane Moriarty, is largely set in the affluent portions of Monterey, California. Reese Witherspoon and Nicole Kidman are both Oscar-winners who have also been movie stars for more than 20 years. So when I say that their performances in Big Little Lies are either the best work of their careers or pretty damn close to it, it’s meant as the highest praise possible.

Even with seven episodes to flesh out the story in Moriarty’s book, Big Little Lies still occasionally feels overstuffed (not only is Madeline fighting to stage a controversial production of “Avenue Q,” but the musical’s director also gets his own mini-storyline). That being said, there is so much rich and entertaining material here about friendship, motherhood, marriage, and so much more that it’s easy to overlook the indulgences of this miniseries.

“Ma’am, you need to understand that the president doesn’t actually want you to do anything other than continue to be a woman — which you’re doing a pretty okay job at.”

While Selina Meyer has done a passable job as a woman throughout the first five seasons of Veep, the vice president-turned-(temporary)president and her staggeringly incompetent staff have failed at pretty much everything else. The good news is Veep itself still does far more than an okay job of poking profane fun at the absurdity of Washington, D.C. and its swollen egos, even though season 6 finds Selina’s squad more scattered than ever.

Although the team inevitably starts to drift together and cross paths as the season progresses — Mike is brought on board to work on Selina’s memoir, and it’s not because he’s a great writer — Veep largely sticks to its plan of keeping Selina’s former staff apart. But while this allowed the show to mine new territory for comedy — the vapid, cutthroat world of network morning shows; everything that goes into putting together the perfect Presidential Library — I personally missed having the gang together.

That’s not to say this cast isn’t still at the top of its game. This is the second season without creator Armando Iannucci, who previously spearheaded the equally-profane, British government-skewing series The Thick of It. (He also directed that show’s feature film spin-off In the Loop.) Season 6 of Veep felt like new showrunner David Mandel and his team further stretching their creative muscles a bit to keep the show fresh, which is obviously admirable even if the show doesn’t quite reach the delirious heights of the last few years.

If Silicon Valley has one consistent flaw, it’s that Big Head’s absurdly good fortune extends to the rest of the Pied Piper crew, which undermines the wonderfully effective dramatic moments in this comedy series. The show as a whole remains as funny as ever, even if things always get resolved a bit too neatly.

The mixture of low- and high-brow humor is perfectly encapsulated in the show’s “Not Hot Dog” app, a penis joke that somebody took the time to adapt to the real world. This is also a show that debates the proper pluralization of “hard-on,” while also shining a light on lawsuit-happy “patent trolls” and mining real-life for comedy gold (Apple’s Chinese factory controversy, and a CEO uprooting his life to seek enlightenment).

When people talk about racial and gender equality, they typically point to notions like everyone having the right to vote or the same opportunity to pursue their personal or professional passion without fear of discrimination. The premise of Insecure — HBO’s funny and insightful comedy series about modern relationships — is not quite that lofty, but no less worthy: black women reserve the right to be just as neurotic and lead love lives that are every bit as messy as their white counterparts.

Insecure is loosely based on star/co-creator Issa Rae’s popular web series Awkward Black Girl. Rae’s goal with both of her shows is to subvert the stereotype of sassy, confident, angry black women that is most commonplace in series where there is only one black female character.

Insecure walks a tricky tightrope of appealing to all audiences while addressing issues that specifically affect black women. The latter includes Big Picture topics, such as the idea that black men are into all sorts of women (white, Hispanic, Asian, etc) except for black women, and how black professionals have a smaller margin for error at work. However, there is also space for smaller picture riffs like the fact that all educated black girls seem to like Drake. Obviously, the issue of racism also pops up in various forms. I was more impressed by the subtler scenarios — Molly (Yvonne Orji) being asked to have an uncomfortable chat with the only other black employee in her office — than some of the scenes involving Issa’s cartoonishly tone deaf co-workers.

“Have you ever seen two priests wearing tracksuits?”

The highest praise I can offer for The Young Pope — the staggeringly extravagant and deeply strange co-production between Sky Atlantic, Canal+, and HBO — is that I can guarantee you will see something you have never seen before. (A pair of priests in tracksuits is the least of it.) The show is bold in both its style and storytelling, although it only unequivocally succeeds in one of those two areas. Given all the Vatican-centric politics and power plays, it’s easy to see why this show was dubbed “House of Cardinals.”

Jude Law stars as Lenny Belardo, who becomes the first American pope and takes the name Pius XIII. Turns out the people who schemed to get Lenny elected — most notably, Cardinal Secretary of State Angelo Voiello (Silvio Orlando) — had idea how unlucky the number 13 would be for them.

The Young Pope is created by Paolo Sorrentino, the Italian filmmaker who won a Best Foreign Language Oscar for 2013’s The Great Beauty. Sorrentino also directed every episode along with either writing or co-writing each installment, so it is safe to say everything we see on screen reflects his singular vision. Sorrentino brings a bracing and stunningly loose sensibility to what is historically a pretty rigid institution. And it’s not just sublime, absurdist touches like the recurring visual gag of nuns playing basketball/soccer or using “Sexy and I Know It” for a montage of Lenny getting to address the cardinals. (It’s also worth mentioning that the very first episode opens with the new pope crawling out from under a mountain of babies…so, yeah.) The Young Pope boasts a dazzling visual style that painstakingly re-creates segments of the Vatican while simultaneously leaning into the otherworldly (and anachronistic) nature of such a sacred place.