Posted in: The Reel World by Jeremy Butler on December 27th, 2017 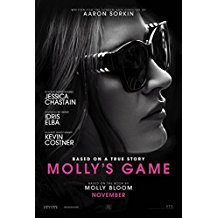 “The worst thing that can happen to you in sports is fourth place at the Olympics. Seriously……f$*& you.”

So I only had a vague knowledge of the name Molly Bloom when I initially heard about this movie. Basically, I knew that she used to organize poker games for celebrities and masters of industry. I even recall hearing about her getting into legal trouble, but the specifics regarding her situation escaped me. I imagine that was the case for many people that don’t closely follow the tabloids. Molly’s Game, the film based on the experience, sheds a great deal of light onto her legal trouble as well as providing an in-depth look into the titular character herself. Narrated by Jessica Chastain, who also stars as Molly Bloom, the film shows her as an intelligent woman with integrity (it’s worth mentioning that certain liberties are taken, even in based on true stories) who finds herself facing a lengthy criminal sentence after being connected to a racketeering case which includes the Russian mob.  Intercut between the circumstances leading up to her arrests and her court case, Molly’s Game provides the audience with every detail they could possibly want about the character. I cannot imagine a better feature directorial debut for Aaron Sorkin.

Olympic hopeful Molly Bloom (Jessica Chastain) imagined a different life for herself. However, a one-in-a-million incident during their qualifying event dramatic changed the course of her life. With her dreams crushed, Molly moves to Los Angeles to reinvent herself. Shortly after taking a job for an obnoxious real estate agent (Jeremy Strong), she is introduced to the world of underground poker. At her bosses’ weekly game, she finds herself rubbing elbows with celebrities and business tycoons. Before long, Molly has become a figure at the game and seizes control of it to the chagrin of her former boss.

The film shifts from the circumstances leading up to her arrests to her court case where he hires established lawyer, Charlie Jaffey (Idris Elba). The relationship between Bloom and Jaffey is a tense one, as Jaffey is hesitant to defend her and initially plans to represent her temporarily, but has a change of heart when he discovers the depth of her character.  Little does he know that he must battle with the prosecution as well as his client in regard to her defense. With her freedom on the line, Molly continues to be defiant in regards to her former business and her clients.

Off the bat it goes without saying that Idris Elba is excellent in his role. He is quick-witted, and his interactions with Jessica Chastain amount to verbal sparring matches. This brings me to the next selling point for the movie, the chemistry between the two main characters. Their dynamic is a key focal point of the film, as well as a theme that drives the story forward. Naturally, their interactions start off as antagonistic, but watching the organic way that these two go from begrudged allies to peers of mutual respect was a highlight of the film for me. Performance-wise all the actors are at the top of their game, especially Jeremy Strong as the unlikeable Dean and Chris O’Dowd as the plucky everyman who is not-so-secretly in love with Molly. That said, the breakout character without question is Jessica Chastain. An established actress already, she becomes the embodiment of the character for me, exemplifying vulnerability in the somber scenes as well as a calculating mind as she makes arrangements to seize control of “the game,” as they call it.

Aaron Sorkin tells a good story; we have seen in his depiction of The Social Network. This latest film makes it seem like he prefers a true-life story, but hey, whatever works. In Molly’s Game, Sorkin plays to his strengths such as the rapid-fire dialog and extended monologs (excellently delivered by Idris Elba) as well as what a frequent collaborator of his refers to as the “walk and talk,” a moving sequence where characters engage in conversation while moving through the set; such is evident in the introductory scene between Chastain and Elba. This coupled with compelling dialog makes for a worthwhile movie experience.  I like how the book was a featured  theme in the story, and Jessica Chastain’s narration of the events leading to her arrests gave the vibe like maybe we were in the book. The quality that I most enjoyed was Molly’s ethics. The fact that she was protecting people who were protecting her as well as the vehement way that she defends herself against all accusers, whether it’s her lawyer, the prosecution, or her own father, made her a champion working to overcome insurmountable odds in my eyes.

Audiences are not likely to be disappointed with Molly’s Game. Whether you know the story or not, you will know all you need to know by the times the credits roll. Between the compelling dialog, phenomenal performances, and Sorkin’s trademark style, there is bound be something that every viewer can relate to. Not likely to win the box office, but definitely critically loved.

Jeremy Butler is a film school graduate of the International Academy of Design and Technology. He is been writing for Upcomingdiscs since 2012; however, movies have played a big part of his life for much longer. Favorite genres include horror, science fiction/fantasy, and comedy. Favorite movies are V for Vendetta, Boondocks Saints, Kiss Kiss Bang Bang, and The Godfather.
12 Days Of Christmas Giveaways – Day 3: Cars 3 On Blu-ray From Disney/Pixar 12 Days Of Christmas Giveaways – Day 4: The Fall: The Complete Series From Acorn