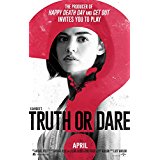 Captivating, creepy, and chilling, the supernatural thriller Truth or Dare takes you on a never-ending journey of death.  Much like other horror films that have perfected the formula for surprise and contagious emotional terror, this film has it all bundled tightly and calculating to transfix the audience into believing. If you saw the films It Follows, The Ring, and the Final Destination series, you’ll relive the sensations those films made way beyond leaving the theater.

On the last day Olivia runs into Ronnie (Sam Lerner), an old flame, at the bar of their hotel, and the discussion between them starts to get heated. Carter (Landon Liboiron), who’s sitting at the bar, butts in on the conversation to save Olivia from Ronnie’s rude remarks.  Carter then carries on a conversation with Olivia until the rest of the group joins them.  It’s the last night of spring break, and the collegians want it to continue until dawn.  Carter tells them he knows of a special old church where he can take them that will make their stay in Mexico perfect.

When the group gathers inside the church hall, Carter suggest they play Truth or Dare.  So begins a night of weird happenings and an evil that will stay with the visitors way beyond their return to college.  Director and co-screenwriter Jeff Wadlow (Kick-Ass 2) does a fine job setting up the initial meetings and keeping the suspense and dread moving on throughout the film. He’s able to do what some of the pros have accomplished in the world of horror, keep his audience on the edge of their seats waiting for the next death to take place.

Wadlow almost makes the perfect film, but in my humble estimation, it’s not, and for that, you’ll have to see the movie to understand this statement.  That said, although I found it a major deal, you may think I’m too picky.  In fact, it may have the opposite effect and scare you so much that you’ll never play the game “Truth or Dare” the rest of your life. Just saying.

The acting by the whole cast is terrific, with Lucy Hale knocking her character out of the park. As the whimsical college coed Olivia, she’s bright and energetic, but when her back’s to the wall, it’s a different story.  Controlling her character, she’s seamless in every scene, revealing every side of Oliva. She develops Olivia’s fears and then the resistance to the evil that has been set upon her. You may know of Hale’s fine acting as Aria Montgomery in the 160 episodes of Pretty Little Liars.

In acting support as Oliva’s BFF, Violett Beane takes on the flighty Markie and owns the role.  She does a very good job of showing Markie’s erratic behavior, especially when Olivia gets singled out as being attracted to her boyfriend, Lucas (played by Tyler Posey).  The jealously starts to emerge, revealing her dark side.

Truth or Dare has been rated PG-13 by the MPAA for violence and disturbing content, alcohol abuse, some sexuality, language and thematic material. The film is really borderline R-rated due to several scenes of violence and morbidity. Immature teens should be cautioned when wanting to see the film.

A very good chiller with a sadistic antagonist. Be cautious when deciding to allow immature children see the film, as it does have some scenes that are inappropriate for youngsters.

John Delia has been on all sides of the movie business from publicity, writing for publications and on line blogs, script writing, to film making. Writer, critic, film editor he has worked as a film critic on this second go around for 14 years. He earned his Bachelor’s degree at the college of Journalism and Communications at the University of Florida in Gainesville, Florida. John is an active member of the Southeastern Film Critics Association (SEFCA) . Favorite Films: Lord of the Rings/Hobbit trilogies, The Godfather trilogy, the Indiana Jones trilogy (I didn't like the 4th), The Avengers and for TV it's Game of Thrones. As for animation it's a tie between anything Pixar and everything Hayao Miyazaki.
Isle of Dogs Tad the Lost Explorer and the Secret of King Midas