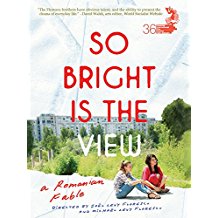 Volume four of Film Movement’s Festival Favorites series features three films with female leads. While these certainly aren’t the worst films I have seen, the pacing of each of these films make them hard to watch; So Bright is the View especially. Each film has a significant social critique that might be worth the watch if you have the patience to find it, but it definitely takes a special kind of filmgoer to really appreciate these types of films. In addition to each film featuring a female lead, they each hail from a different country, which seems to be important for each film’s message. A Blast from Greece, Soldate Jeanette from France, and So Bright is the View from Romania.

A Blast delivers a very foregrounded message about the most recent financial crisis in Greece. However, if you don’t really know too much about it, the film gets very confusing very quickly. The timelines in the narrative jump around without warning, from present to past, but there are so many different “pasts” that it is hard to pinpoint exactly where in the main character’s life we are. My assumption would be that these separate “pasts” are like memories in chronological order, but they are each introduced (or concluded? never quite clear) with a steamy, borderline pornographic sex scene between her and her husband. So if you are not ready to see two young lovers copulate as a sort of transitional piece, you are already going to feel uncomfortable. However, even if you are able to sit through the intense sexual endeavors, they distract you from their very purpose: an insight to Maria’s dreams for her and her husband. So while I can obviously tell that there are a lot of great allegories to be read about the financial crisis, it is very hard to keep up with the timelines through all of the sex.

Next is the French film Soldate Jeanette, and probably my favorite of the grouping. This film has a similar concern with finances; however, its message feels much more universal. It simply wants you to shift your understanding of money by making the concept of using money trivial. Fanni, the lead character, spends a lot of her time complaining about having to spend money, but then wastes money on leisurely things. Eventually, the film throws subtlety out the window and shows Fanni burning a large stack of currency. A provocative image, sure, but the film really sets provocations few and far between because of its pacing. I am normally a fan of long takes or lingering shots, but in this film they are a dime a dozen. Because they are so frequent, it is hard to find a solid purpose in their existence (if they have any purpose at all). Largely, they are frustrating. Which is unfortunate, as the film has such incredible strength behind the snail-like pace.

Concluding this set is So Bright is the View. I will be honest; it was very difficult for me to find any form of valuable message in this film. I know it’s there, but entertaining an audience is not something this film succeeds in. The film is comprised of long 8-12-minute static takes of characters remaining static while talking to each other. Some of the dialog is interesting, but film is a visual medium more than anything. The aforementioned snail-like pace of Soldate Jeanette pales in comparison to this film, which is a complex telling of a woman attempting to get a job in America. While the implications of a foreign girl finding work in a country that is predicated upon achieving dreams are many, the film’s way of exploring them is through an overbearing mentor-type character, who does not add any fun to the film.

I would argue that this set is worth picking up for Soldate Jeanette, but the other two films really bring out the qualities of Soldate Jeanette that I really don’t like (slow pace, unexciting cinematography, uncreative editing, etc.). I say this because I typically really enjoy foreign indie films, and I feel that the combination of the films really does it a disservice. I see the themes that tie them together as a strength, but the actual execution of each film really made me lose some patience.