Indie Films With An Artistic Theme: My Art – The Paris Opera – Conduct! Every Move Counts 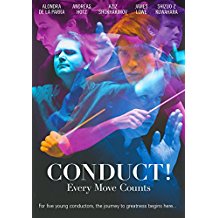 This grouping from Film Movement has been my favorite to date. The theme that ties these films together is what I would label as “art as process.” Each film revolves around the philosophies of making, practicing, refining, and reflecting upon one’s own art. Featuring one narrative and two documentaries, this grouping really foregrounds the importance of the messiness when it comes to process. In order to be a true artist, a true expert in your craft, you can’t be afraid to get messy: to fail before persevering. My Art, The Paris Opera, and Conduct! Every Move Counts each share an appreciation for failure and the seeds of success it plants within aspiring artists, both young and old.

First in the lineup, My Art, is a love letter to the cinema and the overall process of art. Written, directed, and starring Laurie Simmons, the film feels somewhat autobiographical. Perhaps the character, Ellie (played by Simmons), may not be an exact replica of Simmons, but their likeness in age and the film’s message of struggling to maintain relevance in an art scene offer what I would like to consider a personal touch. The way in which Ellie refines her work is by recreating classic films that star herself and two other actors nearing her age, with an old video camera. While I didn’t really fall in love with the film given its pacing, I couldn’t stop thinking about the implications that Simmons puts forward with this simple narrative: the naïve exploration of “new art” through an unconscious use of aging media. For example, Ellie is an elderly woman recreating films that inspired her to become an artist when she was young, but now she returns to that nostalgic feeling with older “new” technology in order to record it (digital video has largely replaced film in many cases, but the digital video camera she is using is old and struggling to find its place, just like her character). So much of the film plays upon this tension that it propels the audience through the pockets of narrative that seem to lag.

Next in this grouping is a documentary: The Paris Opera. The film concerns the inner workings of how the titular program is constructed from initial marketing, to set design, to rehearsal, to performance, and all the behind-the-scenes drama that comes along with it. It has been said of the film that it is “a must for opera fans.” While I agree with that sentiment, I think there is something for everyone who is a lover of film as well. True cinephiles understand and appreciate the blood, sweat, and tears that go into making a film, and the same is true for opera. This film gives you the insight of all the hard work that goes into bringing these famous programs to life, but it also gives you a very real look at all of the amazing talent that they acquire each year. My favorite aspect of the film is the intimate nature of watching a professional opera singer take criticisms from other professionals, seeking to improve their own craft for the love of the art. It is always very humanizing to watch the “masters” approach their craft with a willingness to refine skills and possibly even learn more than what they knew.

We close out the set with another documentary, Conduct! Every Move Counts. I don’t know if it’s my love for music, my experience in middle and high school band, or some combination of the two, but this is by far one of the most interesting documentaries I have ever seen. It showcases the importance of conductors’ charisma and grace (two things that judges of conducting competitions look for, apparently), as well as gives insight to their backgrounds and their working process, and how they are judged individually in their competitions. I honestly think that anyone can and will enjoy this documentary, as each conductor has their own unique, quirky charisma, that astonishingly can lead entire orchestras. If my emphasis hasn’t given it away yet, this documentary simply blew my mind. Perhaps the best part of this documentary is when you feel like it begins to lull, and your attention begins to subside, the judges from the competition stop the conductors and tell them that they are taking too long and are basically being boring, and that’s hilarious. Because the film follows the contestants through a competition, it is inherently compelling to watch who makes it through to the finals and who doesn’t. This film is fantastic, and it is my favorite pick from the entire collection.

Film Movement certainly knows how to put sets together. Whether I end up liking or disliking the films seems to matter less and less the more I watch through their picks. Their ability to set marketing programs according to theme is astounding, especially with each film in a set being an absolute winner in the eyes of the critic. This most recent set certainly has the most charm to date, especially Conduct! Every Move Counts. If you believe that the artistic process is indeed a messy one, then you will have no trouble finding elements of each film that you will appreciate.